Peter Brown calls himself a geek with a set of power tools.  He does many imaginative projects on his YouTube channel called Shop Time.  Now, some of these projects are kind of far out.  For example, his gummy bear axe being a prime example of something that you never thought you’d see.

Shop Time, as a YouTube channel, started several years ago, and if you take one look at the videos he has made over the years, you can see that Peter likes to experiment – a lot.  That said, Peter doesn’t claim to be instructing people on how to make items, and he isn’t creating videos with the express purpose of selling products, which made him even more of a riddle wrapped in a mystery to us.

What makes Peter’s channel really quite unique is not only what he makes, but how he approaches every project.  Even just looking at his current video selection page is a medley of curiosity unto itself, and shows that he’s into making a whole lot of different stuff.  Definitely not just one type of thing going on here.

Here’s just a few of the videos he features on his Shop Time YouTube channel. <- Click to visit! 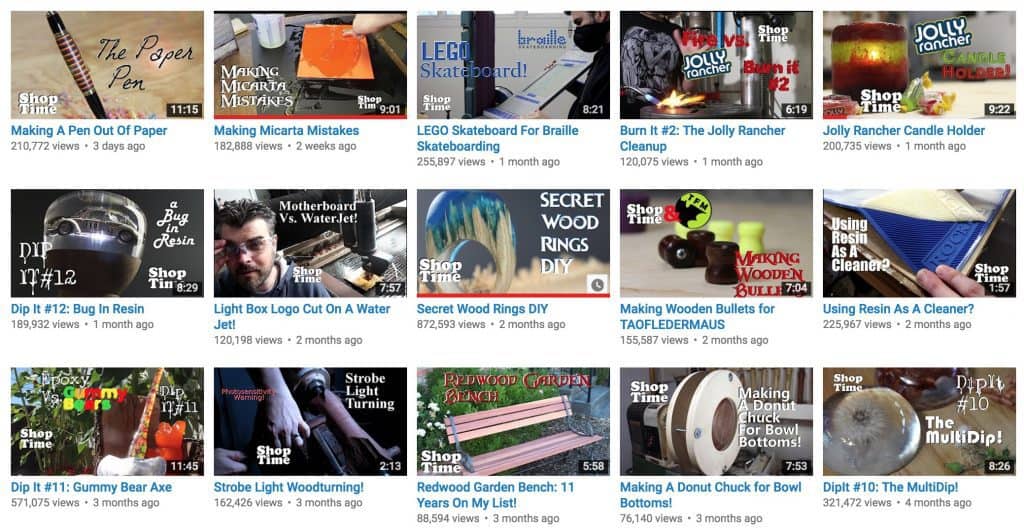 We spoke to Peter recently via Skype, and he shared with us lots of interesting insights into his creative process, which we want to now share with you today… Peter is a native of California, where the redwoods grow.  In fact, he recently made a redwood bench that he’s been promising to make for his wife for the past 11 years.  Wow, that’s pretty good!  🙂

We asked Peter if these ideas just come to him from his dreams, or what the heck is going on here, because, as you can see if you look at his Shop Time channel, there’s a lot of wacky stuff on there. Where do these interesting and creative ideas come from?

Being a seasoned “maker”, Peter has no shortage of ideas for things to make, and the inspiration for these ideas can come from just about anywhere, it seems.  Maybe he’s walking down the street, and he sees a particularly intriguing log just lying there. Hmm… Peter says that he has, on occasion, picked up wayward objects (like, say, a log), and brought these things back to the shop.  Once there, he says, the real commitment begins, because often times these things will live in his shop for months, if not years, before getting used for some project.

One thing that Peter does is he writes his ideas down on a big list that is in his shop.  The list is there to remind him of some of the ideas that he has, and also to keep track of the odd irresistible request that his fans throw at him from time to time on YouTube. His shop is a getaway for him, and so he goes out there to have fun and make stuff that he feels like making.  He could easily make his projects into a full time business, but he says he prefers just to do it for enjoyment.  This element of “fun” is surely evident in the videos he makes, because these projects are often full of color, fun, and spontaneity, and – once or twice – some light-hearted theft!  We asked if things from the shop, such as sawdust, ever makes it into his home.  And yes, yes it does!  🙂

In the shop, there aren’t too many limits which are set, except for, of course, standard safety precautions. You don’t go into a shop that contains all manner of saws, drills, and chemicals and not abide by the basic rules of common sense and personal safety.  Based on the eccentricity of some of his projects, you’d think it might be easy to give yourself a perma-facepalm by gluing your hand to your face, but Peter always puts safety first…This applies even if you are making a ring out of a giant jawbreaker.

We can appreciate that Peter likes to carry out his projects, and if there’s a mishap, he leaves it in for all to see.  You can see in some of his videos that clearly things do not always go according to plan, and this is particularly true of jewelry, since it is often quite fragile to begin with. We here at Love You Tomorrow have a particular interest in all things jewelry-related (and particularly ring-related), and so we of course had to ask him more about these projects specifically – especially the rings!

We definitely learned a lot about rings from Peter, since he makes a lot of rings from such unconventional materials.  One ring that we find quite intriguing that he made is his milliput ring.  Often used for sculptures, we found out that milliput is actually quite durable once it dries, and you slather it with a goodly amount of finish to make it shine.

By blending black and white milliput together, Peter was able to come up with a very unique ring design that is very eye catching and just a wee bit trippy.

DIY ring making requires, at the very least, a drill to drill a hole in something.  Peter talked to us at length about some of the particulars of DIY ring making, and that was thing #1 – the ability to drill that hole.  Beyond that, you need to think about things like the size of the finger said ring will be adorning, which will determine the size of the hole you need to drill. As it turns out, different countries have different measurement systems for this, and you’ll have to consult your country of origin’s own finger measuring system, if you want to go that deep into DIY ring making.  You want to get serious?  Time to start measuring fingers!

Aside from drilling the hole to kick things off, working on the exterior of the ring – AKA the part everyone sees – is where some of the freedom comes in. You can use a lathe, a blade, sandpaper, or some other tool depending on what material you’re working with (usually its a combination thereof).  For the record, Peter has had the same lathe since ’09 – a lucky lathe he picked up on Craigslist that has seen plenty o’ action in the shop! Peter reminds us that when it comes to rings, often you will be whittling the outside of the ring to a very thin and “scary” point, since the vast majority of rings that people wear are indeed rather slim.  This, of course, can lead to breakage if you’re not careful.  Certain materials – especially wood – will need extra binding and reinforcement upon completion, in order to prevent cracking.

Also, from a practical point of view, if the ring is left to be bigger and clunkier, it might look cool, but there’s less likelihood of it getting worn for that same reason. At some point, as a DIY ring maker, you will need to decide if your ring is to be worn or made into more of an ornament.

Peter’s attempt at the DIY Secret Wood Ring is a great example of balancing wearability with decorative qualities.

This “secret wood ring” idea is based on a ring that’s been gaining in popularity on the web, made by mysecretwood.com. The wood inside the resin looks like a secret world almost like a forest inside the ring itself. It’s quite beautiful and fascinating. Peter recreated this effect by splintering some wood, adding resin, and sanding it all down to applying polish at the end.

Clearly, Peter does enjoy the art of ring making, and doesn’t shy away from whatever materials he might fancy using.  This includes using colored pencils to make…you guessed it…a colored pencil ring!  Never afraid to let his audience in on the drama that unfolds, we see that in the following video, the first ring he made sadly cracked before he found greater success in the second “round”.

At the end of the day, Peter Brown is a maker, and makers have their own movement happening these days.  Artists of all types congregate for events like the Maker Faire, of which there is a large one in California that you can check out.  Here’s a clip…

Peter has told us that he often takes part in this eye-popping multi-media event, so if you want to catch a glimpse of some of his creations in real life, head to the Maker Faire next time it rolls through Cali.

We hope that the creative fire continues to burn in Peter’s soul for a long time to come, and we appreciate the time he took to talk with us about all things creative.  Big thanks!