Garnet gemstones aren’t so much just one type of gemstone as they are a group of minerals that share similar physical properties while differing in chemical composition. The most popular garnet resembles a ruby, but these wonderful gemstones come in a variety of colors. Before buying a ring embellished with this multicolored gem, it is important to be well versed in the mineral itself and all the factors of buying a garnet embellished ring, ownership, and upkeep. Garnet is popular for its variety and comes in hues that range from pomegranate red to lime green! This variety is a result of the difference in chemical composition from stone to stone. This chemical composition also results in a wide range of properties that did stone is identified by. Rather than overwhelming you with a list of useless knowledge, we will narrow the important factors down to two simple components of Garnet that we find most useful to the average consumer.

The durability and hardness of garnet depends on its chemical composition, but as a whole, garnet ranges from a 6.5 to 7.5 on the hardness scale. To test the authenticity of a garnet stone, scratch the surface with an item that is in the 1-6.5 range of the hardness scale – a fingernail, for example, sits at a low 2 – if your nail leaves a scratch on the surface of the gem, the stone you’re dealing with isn’t a garnet. If you’re well versed in testing specific gravity, the specific gravity of a garnet is 3.78. If none of that made sense to you, don’t worry, it doesn’t to the majority of consumers. A quick Google search will turn up easy to follow steps on testing for specific gravity and, if you’re unconvinced as to the authenticity of your stone, they may make for a useful experiment.

The garnet is a rich, red gemstone that is the birthstone for those born in January. Over time, wedding anniversaries have been linked to materials that are meant to celebrate the ever-lasting love that two people share in their marriage. For some years, it’s a gemstone. In others, it might be a metal like gold or silver. The garnet gemstone is meant to commemorate the second year of marriage. It might be given in the 16th year of marriage, too.

The word garnet means seedlike based on the Latin word Garanatus. The seedlike nature of pomegranates are thought to be inspiration for the word choice. They have shiny, bright seeds on the inside of the fruit.

Some believe that the word comes from Medieval Latin for granatum, which is a word meaning dark-red. Or granum, which means red dye. Any of these seem entirely possible beginnings for the word garnet. 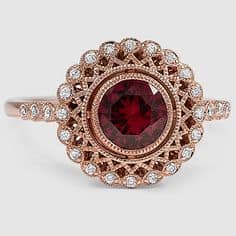 Throughout history, the garnet gemstone has been a popular one because of its rich color. In fact, garnets were found around the neck of a man whose grave was dated to 3000 B.C. This should be proof enough that your garnet will last for your lifetime and beyond if you decide to pass it down to your children and your children’s children.

Big names throughout history have had notable interactions with garnets. For example, the King of Saxony was believed to have had a garnet of over 465 carats. Plato, the famous philosopher, has his visage engraved on the face of a garnet. The garnet has been huge in many religious icons and stories. Hebrews mention the garnet in Aaron’s breastplate. Noah was thought to have used a glowing garnet to light the dark during the days of rain. The Koran says that the garnet lights the Fourth Heaven.

How is Garnet Formed?

The garnet is not a rare gemstone as much as it is beautiful. It’s a common occurence in metamorphosed rocks as well as some igneous rocks. The garnet is formed under the same conditions that cause those types of rocks. It’s high pressure and high temperatures that form the garnet as well the rocks surrounding them. Where is the Garnet Gemstone Found?

The source of the garnet gemstone will depend on the color of the stone. While many people believe that garnets are only available in rich, deep red. There are many colors of garnet as we’ll get into soon.

Pyrope is mined in China, Myanmar, South Africa, Tanzania and the U.S.

Rhodolite is found in India, Sri Lanka, Brazil, and the U.S.

Spessartite is found in China, Kenya, Namibia, Tanzania, and the U.S.

Grossularite or Hydrogrossular is mined in South Africa, Zambia, and Myanmar.

Andradite or Demantoid is found in China, Russia, U.S., Korea, and Zaire.

What about the Color?

Garnet gemstones come in a variety of stunning colors dependent on their chemical composition. We have compiled a list of some of the most popular varieties of this multifaceted stone. Green is a popular shade for garnet enthusiasts: a demantoid is a green andradite and a tsavorite is a green grossular. This distinction is important because tsavorite’s are more valuable than demantoids. The most valuable green garnet is an uvarorite garnet – this is the only garnet that is consistently green which makes it extremely popular amongst gem enthusiasts and highly sought after.

Garnet’s are essentially unaffected by heat – because of this, you will rarely see enhanced garnets on the market. But even so, it is still safe to err on the side of caution and not store your garnet embellished ring in direct sunlight. Garnet stones can also be scratched by matters that hold a hardness level of 6.5 or higher – as a result, it is advised to store your gem bearing ring in a secured box, pouch, or away from any diamonds or products that may flaw the stone.

Garnets are avialable in any cut and shape that you could possibly want. They tend to be cut into standard shapes most of the time, which is done because they’re not very large. When they’re found in rare, large carats, they are cut in a way that will maximize the carat weight of the garnet. This will retain its value since large carat garnets are so rare.

Garnets are often set in white gold or sterling silver, which really enhances the deep red of the garnet. To further enhance the color, they can be set with a halo of surrounding white stones. Those white stones could be white topaz or white diamonds. The cost will likely influence your choice of surrounding stones. Garnets in the channel of a wedding band is quite stunning, and extremely affordable for those who are on a budget.

On its own, the garnet is an extremely affordable gem. For the stone alone, you are looking at about $80.00/carat. As with any stone, this price will vary depending on the cost, clarity, and color of the gem.

A garnet is a relatively easy to cut stone allowing gemologists and jewelers to experiment with different cuts and settings. A professionally and accurately gut garnet will be more valuable than one cut in a sloppy and amateur fashion. The most popular cuts for the garnet are cushion and emerald cuts.

The value of a garnet, as in most other stones, will also depend on the clarity – a clear and blemish free stone will cost significantly less than one with numerous impurities. Garnets are very rarely found without any blemishes, so a blemish free garnet is an invaluable find. 1. Although heat and irradiation is typically ineffective of garnet stones, it doesn’t keep jewelers and gemologists from trying. Even experimenting with enhancements can decrease the value of a garnet so it is important to be diligent of whether or not enhancements have been tested on the stone you’re buying.

2. A lot of garnet types can create a lot of confusion – it may be difficult for the naked eye to spot the difference between a demantoid and a tsavorite. If you doubt that your stone is what it was sold as, it is never a bad idea to get it examined by a certified gemologist for a second opinion.

3. Focus on the quality of the stone, rather than the quantity. It isn’t hard to find large deposits of imperfect stone, but it is difficult to find small deposits of flawless ones. Focus on the cut, smoothness, cut, and transparency of the Smokey Quartz when looking for your best fit!

4. Due to the beauty and variety of the garnet gemstone, they are abundantly found in used and antique jewelry. As with any used or antique jewelry purchase, remain diligent and do not buy from a retailer or jeweler that can’t provide you with a certificate of authenticity.

Whether you want to buy a garnet for an engagement ring, birthstone, Mother’s ring or anniversary band, hopefully, you received enough detail in this guide to make an informed decision about garnet. When you present her with a garnet ring, you’ll be able to tell her the history of the gemstone as well as how ancients believe that it protected against depression. She’ll be impressed by how much thought went into the purchase.