Topaz is a gem that seemingly has it all – the durability, affordability and luster come together to create a gem that should be a no-brainer for brides and grooms from all walks of life. Even with all its seemingly positive attributes, there are certain types of Topaz that shouldn’t be used for jewelry – and as such, it is important to be well informed on this gem before buying it.

Understanding All The Types of Topaz

If you’re convinced that Topaz is the stone for you, it is important to be well versed in the mineral itself and all the factors of buying a Topaz embellished ring, ownership, and upkeep. 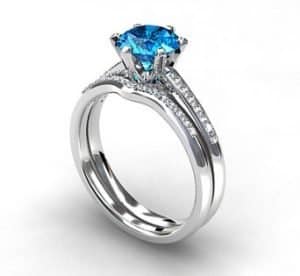 Topaz seems to have it all – the shine, the strength, the affordability, the works! In its natural state, Topaz is colorless and is a passable and inexpensive imitation for a diamond; however, Topaz comes in an array of wonderful shades and colors, all of which bring their own positive and negative attributes. Rather than overwhelming you with a list of useless knowledge, we will narrow the important factors down to two simple components of Topaz that we find most useful to the average consumer.

Topaz is an extremely durable stone. Ruby sits at an impressive 8, making it scratch resistant to matters that fall at a lower hardness level than 8. To test the authenticity of your Ruby, scratch the surface with an item that is in the 1-8 range of the hardness scale – a fingernail, for example, sits at a low 2 – if your nail leaves a scratch on the Topaz, the stone you’re dealing with isn’t authentic. 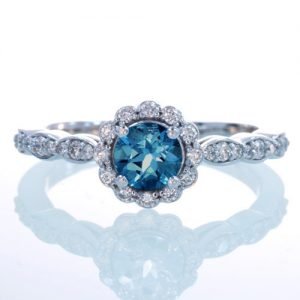 If you’re well versed in testing specific gravity, the specific gravity of Topaz is between 3.53 and 3.58. If none of that made sense to you, don’t worry, it doesn’t to the majority of consumers. A quick Google search will turn up easy to follow steps on testing for specific gravity and, if you’re unconvinced as to the authenticity of your stone, they may make for a useful experiment.

As previously stated, Topaz is a mineral that is found colorless in its natural state – though, at times, Topaz can be found in pastel blues, browns and greys. Topaz achieves much of its color through enhancements and irradiation – as a result, each color of topaz commands its own special care and properties.

In its natural state, one of the hues that Topaz can be found in is a pastel blue. This blue, however, isn’t an appealing shade to many and through the use of heat and irradiating, the stone is altered to a more lustrous and vivid shade of blue. The heat and irradiation treatment don’t alter the cost of the stone, which can vary from $8.00 to $32.00 per carat. In fact, even the clarity of the stone won’t make much of a difference in the price of topaz – the only factor that does is the cut. A custom cut can quadruple the value of a Topaz stone. 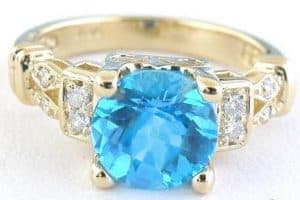 The most popular blue Topaz is called a London Blue Topaz – this shade borders on teal and is the most sought after stone in classification of Topez.

Imperial Topez ranges in color from a light pink to a pinkish-orange. Imperial Topez is typically enhanced to obtain its lustrous shade. Imperial Topez stones are typically sold for about $30.00 per carat and raise in value with the carat size. Interestingly enough, unlike Blue Topez, a naturally pink Topaz is extremely desired and will sell for thousands per carat! 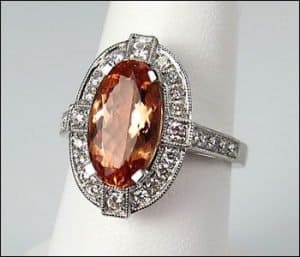 Another type of imperial Topaz that is highly sought after is one in a bright and vibrant shade of pink – though not worth thousands, this shade of an imperial Topez will carry a substantially larger price-tag than a paler counterpart. 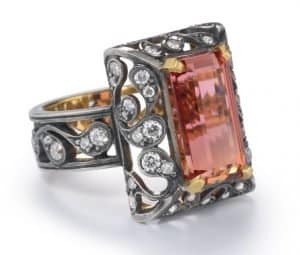 Mystic Topaz is a relatively recent discovery – it originated in 1998 and gained popularity in 2008. Mystic Topaz comes in an array of colors that range from pastels to vibrants! There are two different methods in attaining these hues though, which is notable and key in your decision making. 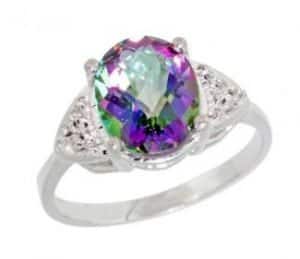 Mystic Topaz stones can be created by coating the surface of the stone with the desired shade – this is an easier option than the next, and as a result, the stones that are coated are less expensive. Unfortunately, this method is also less durable and the resulting ring requires specific care and attention to prevent rapid fading of its color.

The better option for obtaining the beautiful hues of Mystic Topaz is more expensive but easily sustainable and durable – that is, diffusion. Through diffusion, jewelers and gemologists penetrate the stone to add color under the surface, as opposed to simply coating the stone. A little extra time and money – but a more permanent result.

White Topaz, also known as colorless, is a Topaz stone in its most common natural state. This stone is durable and has the luster, but at an affordable price of $5.00 per carat. White Topaz is a strong, durable, and affordable alternative for a diamond. 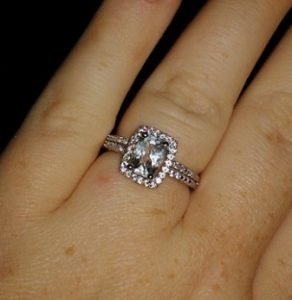 Topaz  is an extremely durable stone that demands little to no special care as long as it’s not enhanced in a manner that says otherwise.  Some enhancements might make the stone sensitive to heat and it is best to consult your jeweller or gemologist as to the special care that needs to be taken of your specific stone.

It is important to remember that Topaz can be scratched by matters that hold a hardness level of 8 or higher so it is smart to store your beautiful gem encrusted ring in a secured box, pouch, or away from any diamonds or products that may flaw the stone.

1. If you’re in the market for a Mystic Topaz, be certain of the fact that its hue was attained through diffusion rather than coating.

2. Natural green and brown Topaz stones are undoubtedly stunning but should not be purchased. These stones are extremely unstable and will quickly fade when exposed to the sun and natural elements.

3. When buying a used or antique gem, make sure to get it inspected by a certified gemologist for imperfections that may not be visible to the naked eye. When buying a Topaz and diamond ring, be vocal in wanting certifications on the diamonds that you’re buying.

4. For the best bang for your buck on Topaz rings, buy from reputable jewellers.