Besides diamonds, emeralds, and sapphires, rubies are one of my favorite precious stones. They look gorgeous, featuring wonderful gemstones with several different shades of red. Some of them are a mix of red and purple hues. When it comes to luxurious accessories, rubies are among the top three alternatives. Unfortunately, their beauty and the stone’s characteristics (shape, cut, color, etc.) make them more expensive than other similar gemstones.

As you’ll discover in today’s article, there’s so much more about rubies than just their beauty and sparkle. Today’s Ruby Fun Facts piece contains some of the most interesting things you probably didn’t know about these precious stones.

My Bottom Line Up Front!

I love rubies, but I’m not a fan of rubies that feature purple-ish hues. Instead, I would always choose one that has a deep red color. At the same time, the only hue I would tolerate would be a faded hint of blue. If you’re born in July, then rubies are your birthstones (oops! I now have to find an appropriate birthday gift for my mom, who’s born on the 17th of July). 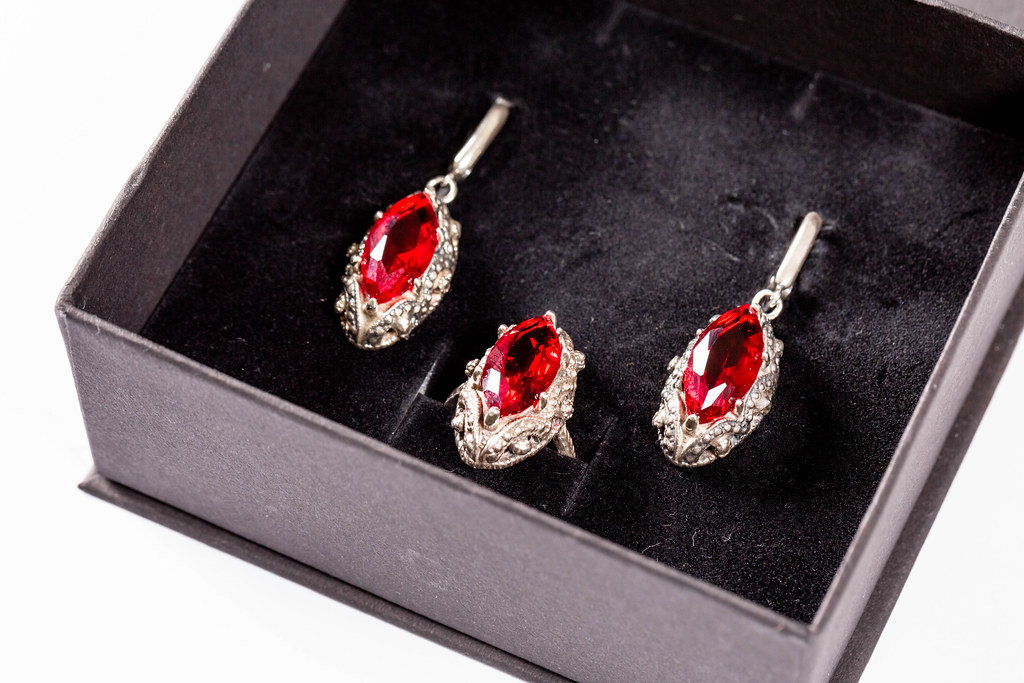 Ruby Fun Facts — the Most Interesting Things about Rubies

Here are some other things you might consider interesting and intriguing about rubies.

Rubies are usually red, and most of us associate this color with romance, love, and passion. Other love-related items like red roses, heart shapes, and cupid statues or icons feature similar colors. Therefore, rubies symbolize everlasting love, as if a burning flame is eternally present inside the gemstone, in its core.

2. Rubies Had Another Name at First

The first name given to this gemstone was “ratnaraj.” The word comes from Sanskrit, and it would translate into “the king of precious stones.” That occurred because the first ruby ever discovered was mined in India. Rubies definitely deserve a great name and symbol like that royal one, despite being considered less valuable than diamonds nowadays.

The word ruby also comes from “Rubeus,” which means “red” in Latin.

3. A Ruby’s Color Is Influenced by Its Chromium Content

The family of corundum stones includes rubies and other gems such as sapphires. Still, corundum in its pure form doesn’t have a color, and the stone consists of a mix of oxygen and aluminum. Whenever this stone encounters various amounts of chromium, it instantly gains color. Aluminum is replaced by chromium inside the stone’s chemical structure, which becomes a red ruby.

Rubies are found in nature, in mines, and several places across the globe. Hence, they’re not all exactly the same in terms of characteristics like color and type. For example, Burmese rubies that feature the deepest red shade are of the highest quality ones. On the other hand, African rubies have a darker red shade with purple hints, whereas rubies found in Thailand contain iron traces, so they’re a deep red color.

Moreover, star rubies appear organically in nature. They’re natural phenomena. These rubies are called star gems because of their easily-recognizable six-prong shape that one can see on the stone’s surface. This wonderful effect is created by natural light.

5. Rubies Used to Be Part of Buildings’ Foundations

This is more of a good-luck charm than a real construction material. Rubies are indeed very durable stones. However, people haven’t used them inside their walls or building structures. Instead, what they did was to place these lovely gems in the ground, right under their houses, before they started building the foundation. They did that because they believed rubies would bring good luck and would have a positive impact on the entire household.

6. The Biggest Natural Ruby Is the Liberty Bell

The largest ruby on the globe is known as the Liberty Bell. Miners discovered it in the 1950s in Africa. The popular stone has no less than 8500 carats (OMG, right?!) and weighs around 4 pounds. Its name comes from the fact that this ruby was shaped to resemble the Liberty Bell, which represents an important symbol of American independence.

To raise its value even more, 50 diamonds were placed around it. This ruby is said to be worth over $2 million. 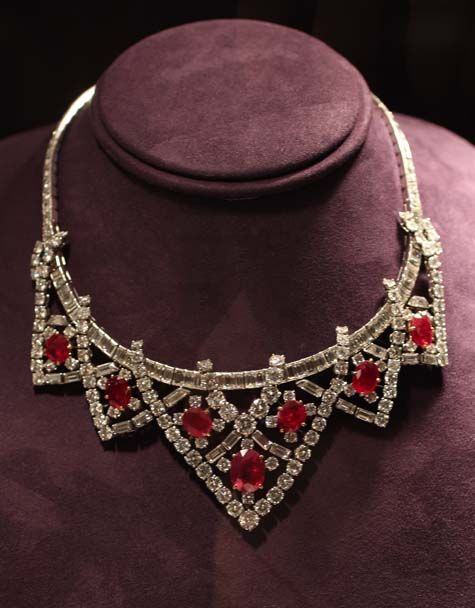 Elizabeth Taylor, the famous Hollywood actress, used to wear rubies a lot which increased their popularity. She began to display these lovely gems when her then-husband, Mike Todd, offered her a ruby and diamonds bib necklace as a gift in 1957. He bought the valuable accessory from Cartier. The amazing necklace consisted of 24 rubies.

Taylor received the necklace, but she also got matching drop earrings and a bracelet as part of the set. How lucky was she?! After the actress passed away, her famous necklace was bought by someone at an auction for almost $4 million.

Natural rubies present flaws such as infiltrations, but that’s totally normal. Being natural gemstones, rubies can’t be perfect without any flaws. There are a few scarce flawless rubies, but they’re treasured and much more expensive than diamonds with the same weight. In fact, a few infiltrations will only confirm that a ruby stone is indeed authentic.

By comparison, synthetic or lab-made gemstones have zero flaws, but they lack the unique features of natural rubies. 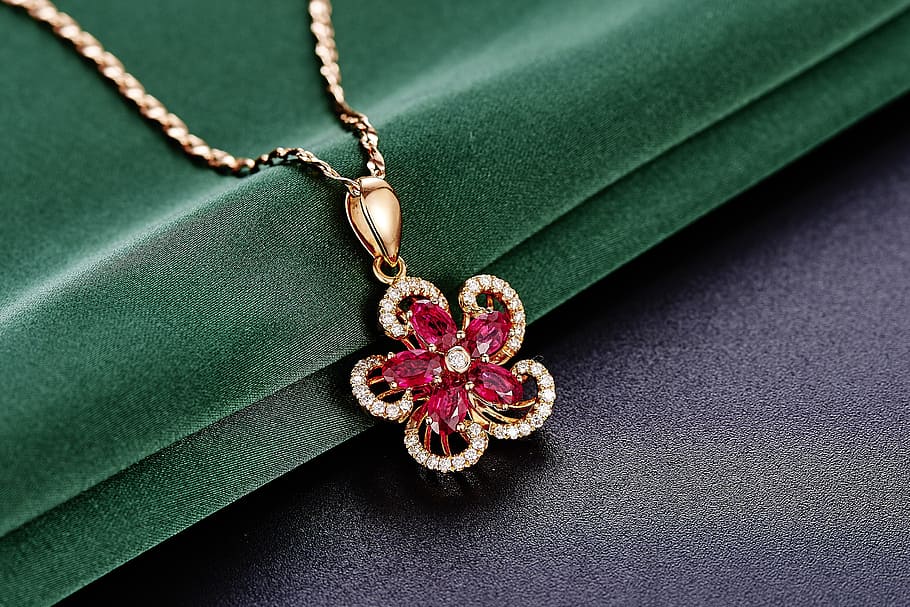 Rubies are gemstones that are part of the corundum family. They’re appreciated and valued for their beauty given by the vivid red color of these precious stones. The stone’s chromium content influences its color. Corundum that’s not red isn’t seen as a ruby. Other colors of corundum are considered sapphires.

So, rubies are among the four precious gemstones found globally, alongside emeralds (which are my favorite ones), diamonds (also known as brilliants), and sapphires. In some regions, miners have found pink corundum stones, either pink rubies or pink sapphires, based on the area where they were mined and their hues.

Where Are Rubies Found?

The finest rubies are found in Burma, Myanmar, in Asia. Ruby mines are also located in several other regions globally, including Cambodia, Madagascar, Afghanistan, India, Australia, Pakistan, Sri Lanka, Malawi, Vietnam, the USA, Thailand, and others.

In the US, you can find ruby mines in Arizona, Nevada, North Carolina, Idaho, Arkansas, and Oregon. Rubies are normally located in mines that contain metamorphic rocks. However, more transparent stones can be seen in mines in Australia. Their level of transparency is created by volcanic action.

Unlike blue gems, rubies are rarer and harder to find.

Rubies were worn as good-luck charms and talismans by warriors when they fought in battles. People believed these gemstones would protect them from injuries and harm. Therefore, we can say that, besides love and passion (which are two symbols attributed to rubies nowadays), these precious stones were also the symbol of protection and power.

Even in movies, accessories embellished with rubies were used as protective gear. Take The Wizard of Oz, for example, in which Dorothy wears ruby slippers to keep her away from danger and evil. In the Bible, these gems are linked to wisdom and beauty. The Holy Book mentions rubies four different times.

According to ancient folklore, Indians believed that rubies would help them maintain peace in their country with their neighbors and enemies.

Until the 19th century, red spinels were mistaken for rubies because these two stones were very similar. Hence, back then, it was believed that spinels such as the Timur Ruby and the Black Prince’s Ruby were rubies when in fact, they were not. Nowadays, the most famous rubies out there are the Edwardes Ruby, De Long Star Ruby, and Rosser Reeves Star Ruby.

In 2011, an auction sold one of Elizabeth Taylor’s ruby rings for over $4 million. The ring’s precious stone had 8.24 carats. The Hope Ruby was the most expensive ruby of all time. It had a little over 32 carats, and its price was almost $6.8 million.

The Value of a Ruby

Rubies with the highest quality have over ten carats, and they’re more expensive than similar-sized diamonds. Large rubies are harder to find than large diamonds, hence, the price difference. The most valuable rubies are mined in Burma, Myanmar, and they go by the name of Burmese rubies.

The most beautiful and most common way in which rubies are used is to create exquisite jewelry pieces. These gems will look stunning around your neck, finger, or ears. At the same time, both synthetic and mined rubies have other purposes as well. For example, they’re used in many industries, such as the production of medical instruments, watchmaking, and lasers. In addition, these stones are useful in many areas due to their red fluorescence and incredible durability. 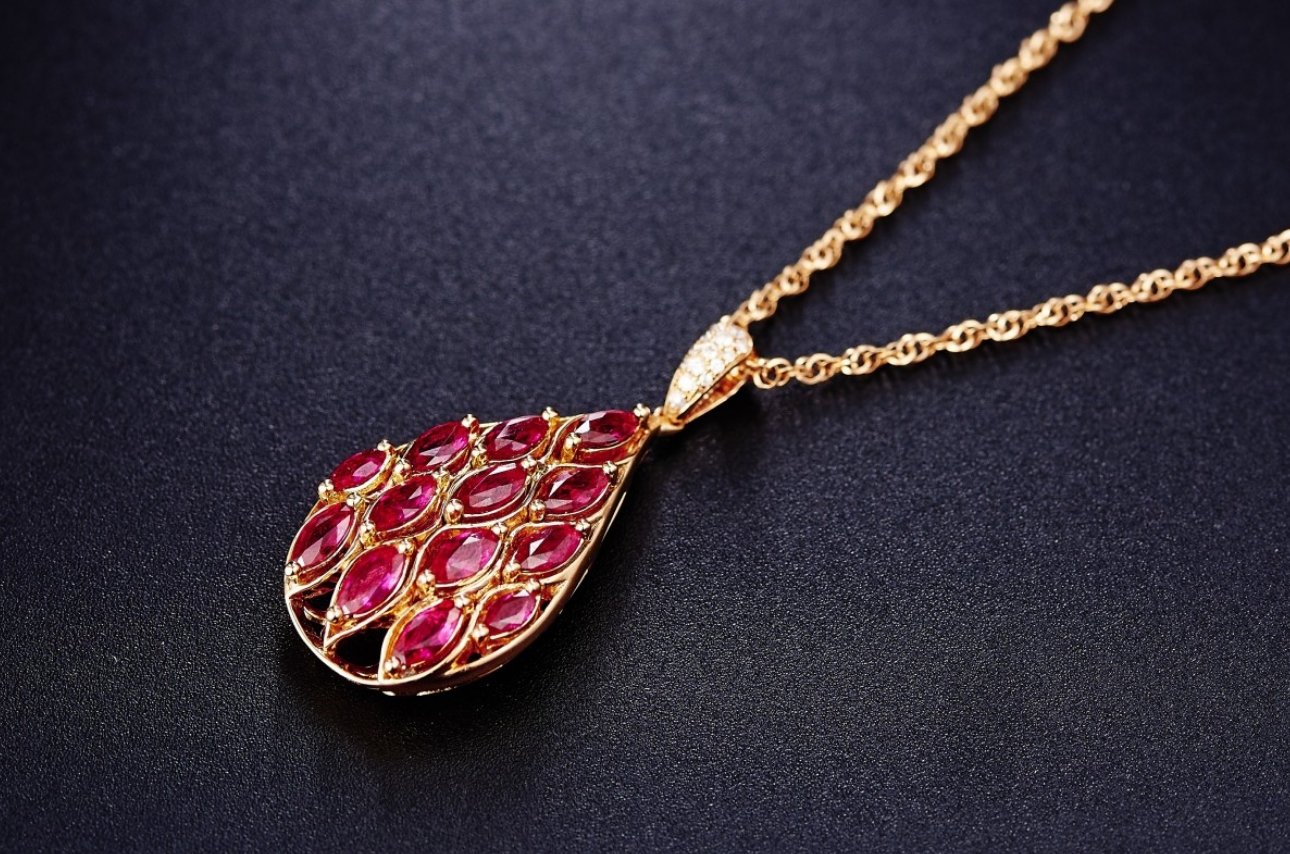 Question: How Hard and Durable Are Rubies?

Answer: Rubies are hard and durable. They are a nine on the precious stones’ durability scale.

Answer: Not really, since rubies are tough stones with a high hardness level. On the other hand, if a ruby is of poor quality and contains numerous different inclusions, it might show signs of cracks that further impact the stones’ durability.

Question: How Can You Check If a Ruby Is Real or Fake?

Answer: Numerous lab-made or artificial rubies contain a combination of glass. Therefore, you can rely on the comparison between the ruby and a piece of actual glass to see whether or not your stone is authentic. For the test to be relevant, you must choose a glass that has a similar color to the one of your ruby. If, when you look at both of them closely, you see that the color is almost identical, then I’m afraid your ruby is fake. That’s because real rubies don’t have very similar colors to regular glass.

Answer: Yes. However, rubies have a different spark compared to diamonds. A ruby’s sparkle is more subtle and features red, purple, pink, and orange hues, while diamonds have shiny white sparkles created by all the colors contained in a rainbow.

Question: What’s the Largest Ruby in the World?

Answer: The current largest ruby in the world is the 125West Ruby. It weighs over 8 pounds and 18,696 carats. This stone features a rough-cut and unpolished surface. The largest natural mined ruby is the Liberty Bell which weighs around 8,500 carats. Other impressive rubies for their size are the DeLong Star Ruby with 100.32 carats, Midnight Star with 116.75 carats, and Neelanjali Ruby with 1,370 carats.

I love rubies. They look magnificent. Unfortunately, I don’t have ruby jewelry yet, but it’s on my wishlist, and I’m saving money for one (fingers crossed). As you can see, these precious gems have fascinated people from ancient times, and they’re still very popular to this day.

Rubies look gorgeous in any form, cut, shape, or size. They’re supposed to offer you protection and good luck, and they are a symbol of love and wealth. Traditionally, some cultures consider rubies the ideal gifts for a couple’s wedding anniversary. Even engagement rings with ruby stones are trendy these days.