The main differences between Moissanite and diamonds are:

When it comes to engagement rings, the most traditional option is a diamond one. From center cut diamonds with optimized sparkle and shine to ethically sourced and conflict-free princess cuts, the sheer variety of cuts, styles, and types of diamonds is amazing. But now another gemstone is giving diamonds a run for their money: moissanite.

Moissanite joins a trend of alternative gemstones that are more affordable than diamonds. Life and Style featured moissanite as an alternative to a diamond ring, alongside other gemstones, such as morganite, aquamarine, sapphires and emeralds.

And it isn’t one article alone. In fact, moissanite proves itself a contender as a diamond alternative based upon market predictions. It’s projected to grow as an industry six and a half percent through 2025. By that year, the industry will be worth over forty eight million dollars.  And North America is where moissanite is anticipated to be in highest demand.  But while Moissanite does seem to be gaining traction, just how does it fare when compared with a diamond?

In this article, we’ll be comparing moissanite vs diamonds and see which of the two makes sense for your engagement or wedding ring, and take a close look at both the disadvantages and advantages to both.

Just how much is there a demand for alternatives to diamonds?

Make no mistake: while diamonds have always been, and continue to be the most popular option for engagement rings. But at the same time, there has been a demand for alternatives for a while.

That’s for a few reasons but mostly comes down to three factors: price, style, and lifestyle.

Yes. While couples are cutting back on wedding costs overall, it is also true that a big target of those cost-saving measures in the engagement ring itself. And that in part explains why alternatives to a diamond ring are becoming a bit more popular.

Despite the old advice (not grounded in any specific reality) that one should spend several months of a salary on an engagement ring, young couples beg to differ.

Is the move towards diamond alternatives just a trend?

Signs point to no. In fact, the rise of alternatives like moissanite and other gemstones can continue over the past several years. A report by the Philadelphia Inquirer tracked the rise of engagement ring alternatives.

Online shopping, both through more traditional jewelry like James Allen and Kay Jewlers, and also outlets like Pinterest have given rise to an influx of more options, more customization, and more diamond alternatives.

As a fashionable way to express one’s individuality, and express and symbol of love and commitment, and an investment anyway you cut it, it’s no wonder that not only diamonds are offered now when it comes to engagement rings.

Are diamond rings going out of fashion? 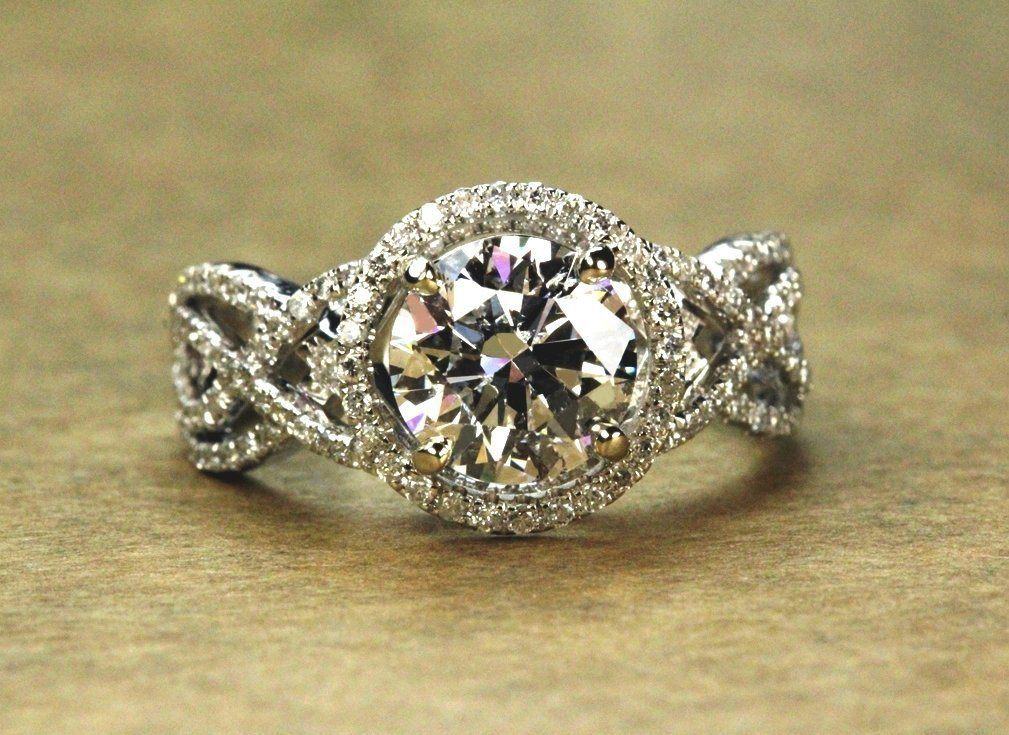 However, it is at the same time important to recognize the staying power of the diamond ring as a sign of elegance, love, and devotion. Diamond rings remain the most popular, and account for nearly all the most popular trends across the country.

Surveys indicate that the preference for diamond rings to gemstones is over sixty-five percent favoring diamonds. While that does show that alternatives like moissanite are still a significantly attractive option to many, it also stands true that diamonds will not be surpassed in the foreseeable future.

And with many opting for the best of both, by adding gemstones to their diamond ring or selecting a gemstone ring with tiny diamonds, it can be disingenuous to say either gemstones or diamonds have little role in the engagement and wedding ring market.

What factors do I need to consider when deciding what gemstone is right for me?

When deciding between moissanite vs diamond rings or any gemstones, it’s important to keep several things in mind.

For one, one gemstone is not right for everyone. Depending on budget, lifestyle, and personal preferences, you can select a quality ring with a good degree of variability. For another, even the seemingly best option will not be a perfect one. For every choice, there are advantages and drawbacks.

That said, going in with a set of criteria can make a big difference if you select something that makes sense for you, and for avoiding impulsive purchases:

There is a good deal of misunderstanding when it comes to synthetic vs natural gemstones.

Forget what is expected or lore around engagement rings and instead be realistic about what you can spend. Of course, opinions differ on how much you should spend, but it should always be in proportion to your salary and how much you’ll be spending on the wedding overall, as well as any expenses you anticipate after, such as downpayments on homes, student loans, and more. Dave Ramsey, a bestselling author, radio show host and buisness man who specializes in personal finance, recommends you spend no more than one month’s salary on an engagement ring.

Keep in mind that there are budget options with all kinds of gemstones–it’s more a matter of how many choices and how big the carat you’ll be able to afford. And if you are looking to save money even on a diamond ring, there are many ways to do so, including buying a slightly off carat number.

Gemstone color consists of three qualities–hue, tone, and saturation. For many gemstones, there is a spectrum of colors within a certain family. Hue refers to general color that you first see. Tone is how light or dark the color is, while saturation refers to the strength or intensity. These of course are matters of personal preference.

This is a critical factor. Gemstone hardness will help determine how well the gemstone can hold up under different conditions.

Hardness is ranked on the Mohs scale, from one to ten, with ten being the hardest. Hardness will tell how scratch resistant it is. Anything rated at seven or lower, such as quartz, has the ability to inflict scratches on the same material.

One of the biggest mistakes people make when selecting a gemstone is either lumping toughness and hardness together or mistakenly thinking they are the same thing. In fact, toughness refers to the molecule composition and is rated on what is called a fracture toughness scale. This scale measures instead of how prone to chipping the gemstone is. A value over 200,000 is considered rather tough, while some of the least tough stones are only a few hundred on the scale.

Environmental changes and circumstances can have just as much of an impact on a gemstone as other key characteristics, such as toughness and hardness. Something may be very tough, for instance but not as heat resistant.

Availability is, of course, a fairly straightforward principle, but it will impact both price and variety. The good news is that you can now easily select a wide range of gemstones, but what it comes down to is how many options you’ll have and who you’ll be able to purchase from, at a price point that meets your needs.

What are the main differences between a moissanite vs diamond ring?

Now that we’ve established the key criteria for selecting gemstones, let’s take a look at both the similarities and differences between moissanite and diamonds to see which option makes more sense for you.

Are there options for synthetic vs natural?

How expensive is moissanite vs diamonds?

Of course, when we’re discussing how expensive a gemstone is, we’re more or less speaking in generalizations. However, a fairly simple way to understand differences in cost is to take into account the average market price per carat.

What is the general color of diamonds vs moissanite?

Color is more a matter of preference, and you may have more options than you originally imagined.

Diamonds can be clear, but there are also fancy colored diamonds. Colored diamonds include varieties in black, brown, purple, gray, white, blue, yellow, orange, red, green and pink in a variety of hues and intensity. Colored diamonds are more rare, with red diamonds being among the most rare. “Pure” diamonds, on the other hand, are colorless and clear.

The diamond color scale ranges from zero, which is colorless, to ten which is the most colored. Some colored diamonds, such a Blue Hope Diamond, are quite expensive, while dark yellow and brown diamonds are much less expensive than clear diamonds. Overall, the greatest demand is for clear diamonds.

Moissanite like diamonds, are commonly clear but also come in ‘fancy colors’. However, unlike diamonds, they are not technically graded, so it can harder to achieve consistency. Moissanite has a similar spectrum of colors and hues, from almost colorless to deep brown.

While diamonds get their colors mostly from natural imperfections, many-colored moissanite are achieved through chemical vapor deposition. Chemical vapor deposition is a synthetic process where the bottom portion of the stone is coated and then coloring is applied–in essence, the entire stone is not colored but has the illusion of being fully colored. You can find moissanite in yellow, clear, black, brown, gray, gold, pink, purple and blue.

How does moissanite compare with diamond in terms of hardness?

This is where we really start to see a significant distinction between a diamond and moissanite. On the Mohs hardness scale, a diamond is rated at the very hardest, with a rating of ten. Moissanite, meanwhile, is a nine and a quarter. That ranks it as a still rather hard gem. For comparison’s sake, emeralds are around seven to seven and a half.

How prone to chipping is a diamond compared with moissanite?

Chipping, as you’ll recall, can predicted based on a gemstone’s rating on the fracture toughness scale. Both diamonds and high-quality moissanite are considered high on toughness meaning neither is especially prone to chipping compared with other gemstones. Be wary of any sellers claiming their moissanite is prone to chipping; while it is a bit more likely when compared with the finest quality diamond, it may mean you’re looking at poorly constructed moissanite.

How well does a diamond hold up to environmental changes compared with moissanite?

A diamond is known to be exceptional in terms of overall wear in a variety of environments. But how does it compare with moissanite?

Bottom Line: Contrary to what might be popular conception, both moissanite and diamonds are considered highly durable.

How available are diamonds vs moissanite?

In terms of availability, you don’t have much to worry about. Both diamonds and moissanite are widely available, especially since they can be manufactured or grown in labs (as well as mined in the case of natural diamonds). Because of this, you can find both diamonds and moissanite at a wide range of cut, clarity, color, carat, and thus, price points. However, it may be easier to find engagement rings with diamonds.

Is a diamond or moissanite preferable for an engagement ring?

Here are the pros and cons of each:

Where can I buy diamond or moissanite rings online? 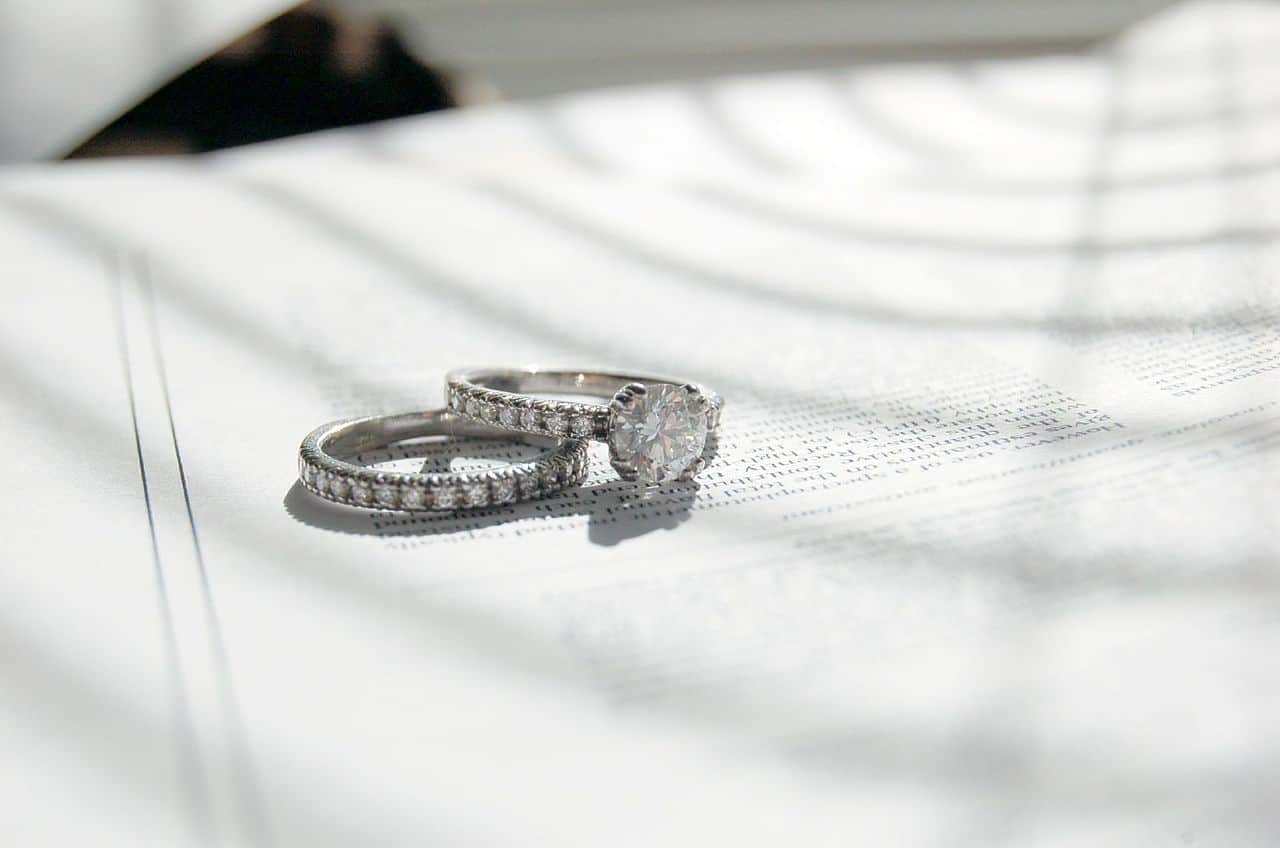 The good news is no matter if you prefer moissanite or diamonds, you have a number of options. For both diamond and moissanite, here are some of our top recommendations:

Erin has always loved wedding-related planning and fashion, and regularly follows bridal fashion in the news. She has also worked for a bridal boutique and is passionate about helping couples plan and budget so they can enjoy their wedding day with as little stress as possible. She is an accomplished writer who writes on many subjects, but she has a special place in her heart for new brides and is here to make their day extra special with great recommendations and ideas you can't find anywhere else.