4 Prong vs 6 Prong Diamond Settings: Everything You Need to Know

When it comes to selecting the perfect engagement ring for your fiance-to-be, there are tons of decisions to make. Most of us focus on the color, clarity, cut, and carat of the diamond- not to mention your choice of stone shape and metal for the band!

However, as jewelry enthusiasts, we have to ask; have you considered the number of prongs?

Now, although prongs tend to be tiny, they play an essential role in rounding off the overall presentation of your ring. Plus, they have a massive bearing on how well your central diamond is protected from damage and loss.

So, which is better, a four-prong or six-prong setting? Luckily for you, we’re going to explore this exact question here in this article- let’s dive in!

First things first, before we move any further forward, we need to discuss what a prong actually is.

In short, prongs act very similarly to claws. They hold the central diamond in place by binding the stone to the band. This ensures the rock is safely secured to the ring at all times.

However, the prongs on an engagement ring shouldn’t be intrusive. Instead, in addition to keeping the stone safe, they should also showcase the beauty of the gem by suspending it high enough to highlight the size, color, and detail of the rock- after all, that’s the main attraction! 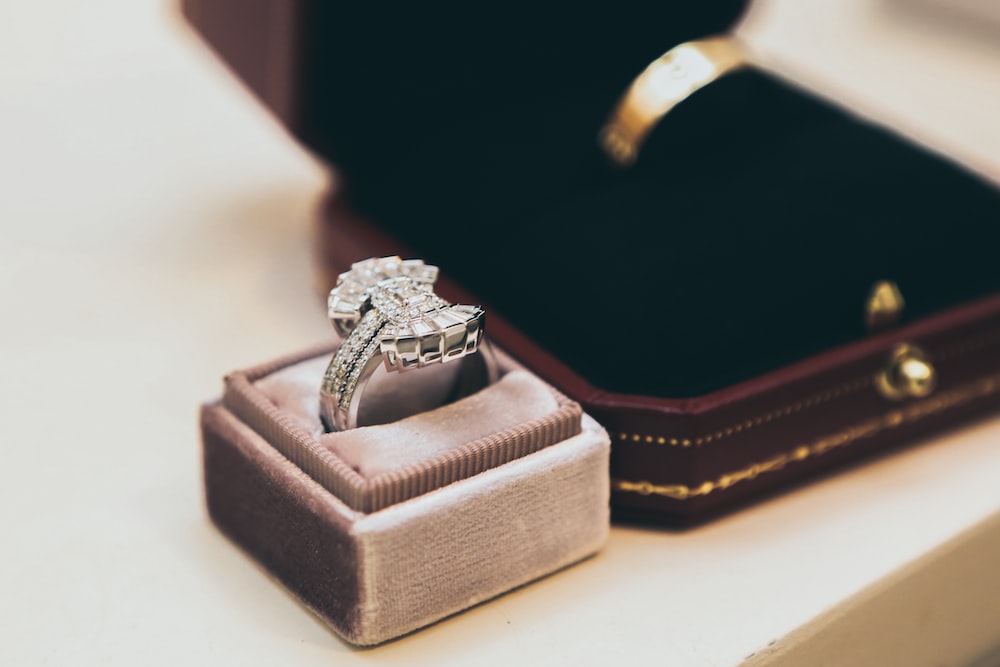 We want to set the record straight in this article.

It’s a myth that the number of prongs impacts the sparkle of the center stone. It’s widely believed that because four-pronged settings allow more light to enter the diamond, it gives the rock an extra shine

This is false. Instead, a diamond’s sparkle is determined by the quality of its cut. It has nothing to do with the prong-setting.

The Advantages of Four-Pronged Settings

There are plenty of benefits to opting for a four-pronged setting. Primarily, the fewer the prongs, the less metal covering the central diamond. This enables more of the stone to be displayed so you can get a better look at your beautiful rock!

Also, experts believe four-pronged settings give diamonds a ‘squarer’ look, which isn’t surprising when you consider a traditional four-pronged setting boasts a two, four, eight, and ten o’clock format. So, when a jewelry designer evenly spaces out these four prongs, they create a beautiful ‘boxy’appearance.

The prongs almost act as ‘distinct corners’ which outline the square, which makes it the perfect for choice for the following diamond cuts:

Four-prongs are also great for complementing smaller diamonds- tiny rocks are quickly engulfed by six-pronged settings which overshadow the beauty of the stone. This is never a good look!

Interestingly, you can also mount a four-pronged setting in a north, east, south, west-style orientation to form a kite shape. This is becoming increasingly popular amidst square cut diamonds because it makes the stone appear more significant than it actually is- which is never a bad thing! 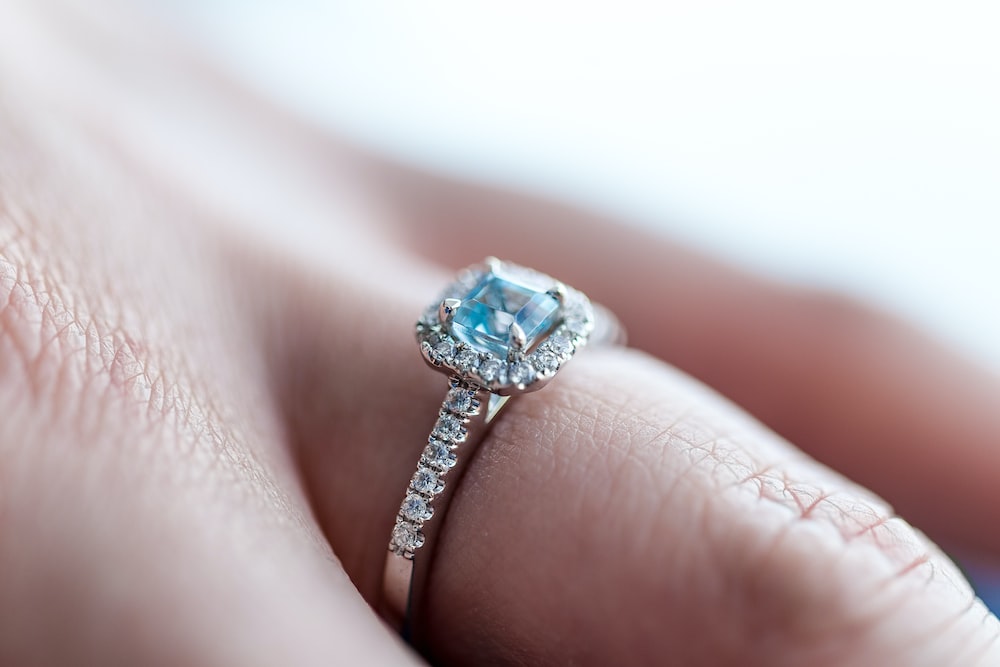 The Disadvantages of Four-Pronged Settings

For all the benefits of four-pronged rings, there are drawbacks to consider. The main one being they don’t hold the diamond as securely (in comparison to a six-pronged setting).

A Few Things to Note About the Six-Pronged Setting

We have Tiffany to thank for introducing us to the six-pronged ring setting. They launched this design over 125 years ago- and it’s still going strong today! It’s now somewhat of an iconic look for engagement rings.

Fun Fact: The six-pronged ring setting helped kickstart the tradition of gifting a diamond-style solitaire ring upon proposing marriage to a fiance-to-be.

When these prongs are evenly spaced around a circular or oval shaped diamond, they’ll form a hexagonal shape. This works wonders for making the diamond look both rounder and more prominent.

As we’ve previously alluded to, six-pronged settings hold diamonds more securely in place. However, prongs wear down as time goes by, and when they’re the subject of wear and tear, they tend to bend and break.

Unfortunately, if a prong snaps off, or is damaged, and it’s part of a four-pronged setting, the central stone can fall out pretty quickly. This is a nightmare (especially if you haven’t taken out insurance to cover your ring!)- trying to retrace your steps to find a missing diamond (when you’re not sure where you lost it) can be near-on impossible.

However, if a prong breaks on a six-pronged setting, you stand a better chance of the stone staying in place and noticing the damage before anything dramatic happens!

The same principle of protection applies to the general bashing your gemstone endures from all the accidental hits it takes. Since more prongs cover the stone, the gem is at a lower risk of cracking or chipping when you knock your ring…

On a separate note, the individual prongs showcased in this kind of setting, usually appear both lighter and thinner, and when designed well can be less intrusive looking than a four-pronged setting! They’re specially crafted, so they don’t overly cover the beauty of the diamond.

When it comes to conserving and maintaining your ring, a six-pronged setting is tricky to look after. It’s much harder to access the central stone to clean it, especially towards the bottom (as that’s where most the filth gathers)- Eww! 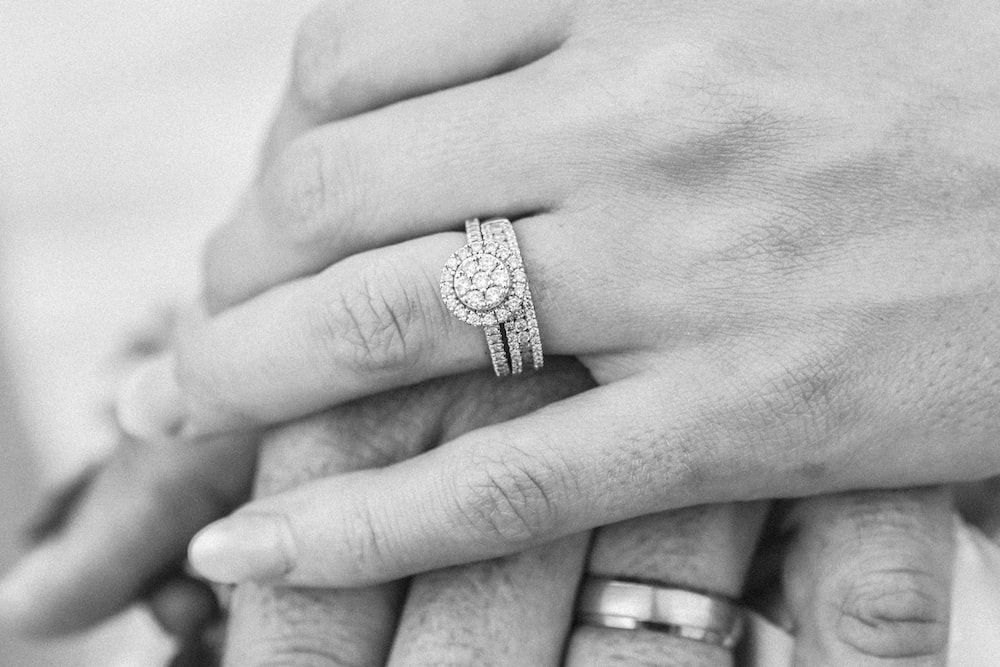 Yes, it’s true, a six-pronged engagement ring is usually more secure than a four-pronged band, but in reality, modern jewelry design has drastically improved over the last few years — both regarding stability and structure.

For example, if you take the ‘truth solitaire’ by Brian Gavin, you’ll notice their four-prong setting is incredibly strong. You’d have to strike the ring insanely hard to budge one of these prongs-  so it would be hard to miss any escaped diamonds!

If you’re purchasing from a high-quality jeweler, the decision to buy either a four or six-pronged solitaire isn’t a massive decision. Instead, you should focus on finding a model that showcases both a high-level of robustness as well as a beautiful overall design.

The same is true for Brian Gavin’s; ‘Melissa four-pronged setting.’ These prongs aren’t overly elevated, which means they don’t structurally rely on themselves. This instantly makes them more sturdy than other traditional four-pronged designs.

Both these examples showcase a support beam that reaches horizontally between each of the prongs. This gives them some extra support to help keep the diamond safe and secure. 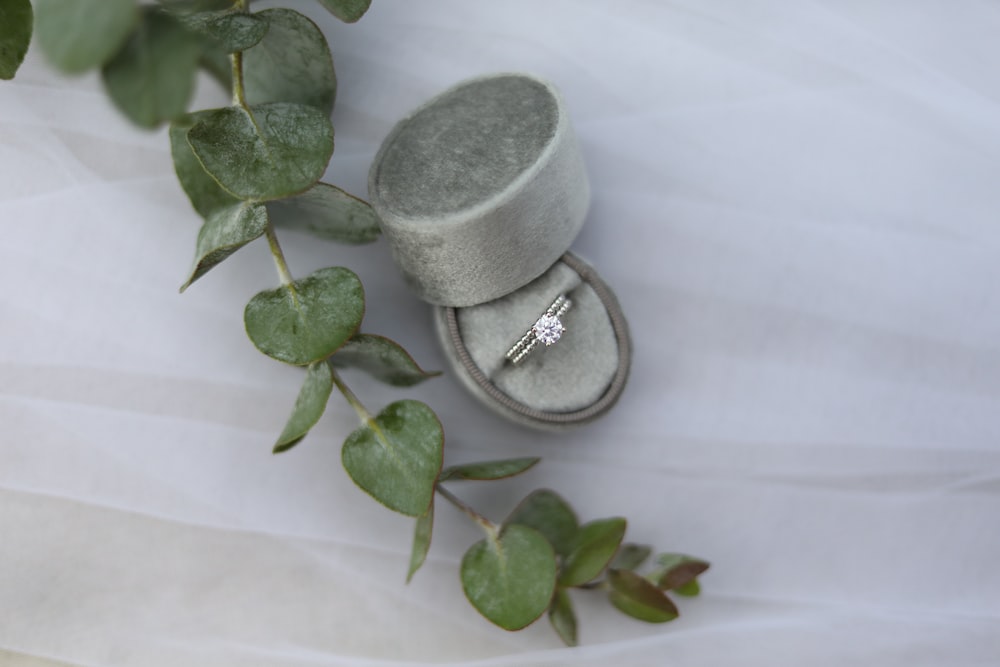 Take the Wearer’s Lifestyle Into Consideration

Before you make any final decisions, think about the kind of activities the wearer regularly engages with. Also, do you think they’ll wear their ring on a daily basis? If you don’t have the money to spend on a top-notch jeweler, then play it safe with a six-pronged setting.

Also, are they the kind of person that’s a worrier? Again, if the answer’s yes, you’re probably better off purchasing a ring with six prongs. That way you avoid any anxiety associated with losing a stone from a four-pronged setting.

Why I LOVE Beverly Diamonds

There are MANY only diamond and jewelry retailers, but only one that I love and trust for those big purchases. That's Beverly Diamonds. They are ALSO top rated by The Knot and WeddingWire. Check them out!

View Selections Learn More
We earn a commission if you click this link and make a purchase at no additional cost to you.

It doesn’t matter how many prongs your engagement ring has, you’ll want to ensure you get your ring inspected and cleaned once every six months.

Be sure to ask the expert to pay specific attention to the prongs. The last thing you want is to accidentally wear a ring with a crack in it that could cause the loss of a precious gemstone!

Handy Hack: hold your engagement ring to your ear. Then gently tap it. However, don’t touch the diamond while you do this. If you’re unfortunate enough to hear ‘clacking’ sound, then there’s a good chance you have a loose diamond. If you do, get this seen by a professional as soon as you possibly can, it may need fixing. For example, you may need to tighten the prongs. 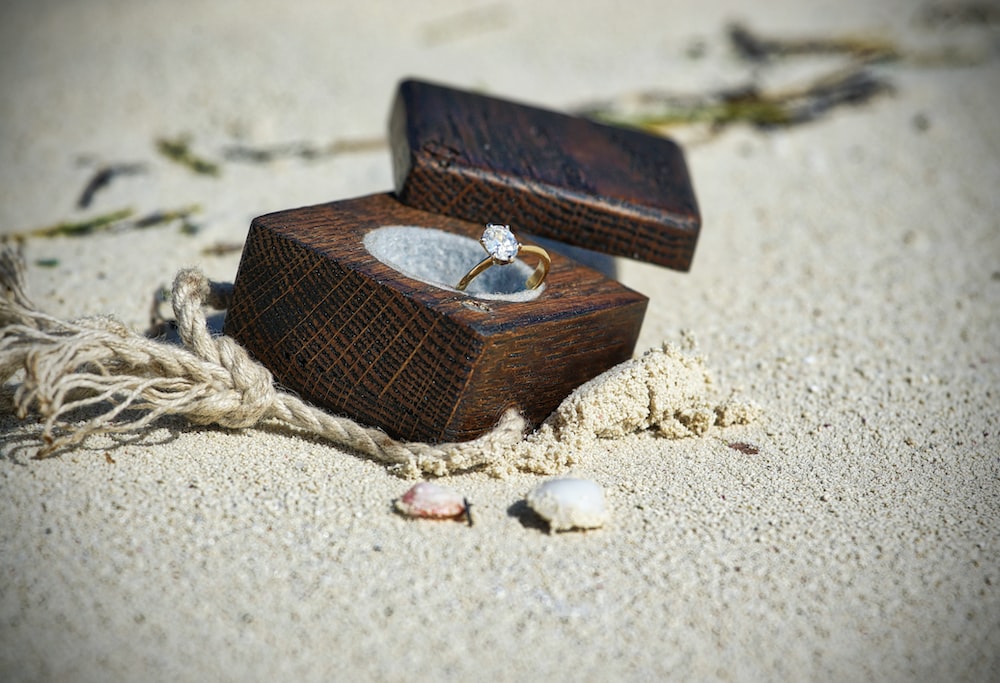 What Metal for the Ring’s Band Are You Opting For?

The kind of metal you’ve gone for will also have a significant impact on your choice of prong setting. For example, if you’ve chosen platinum, then it doesn’t matter as much (regarding security) because platinum is famous for holding diamonds securely in place.

Did you know, platinum is one of the densest metals on the planet?  Essentially, this means platinum prongs are more likely to stay in place because there’s less of a chance of them splitting, separating or coming loose.

However, for all the benefits of platinum, it comes at a cost! Not only is platinum pricier because of its quality, but it’s also rarer than gold- which again boosts its value.

If you can’t afford a platinum engagement ring, then the perfect compromise is to pick a different metal (usually gold) and use platinum prongs. Naturally, this bumps up the price, but it’s nowhere near as costly as an entire platinum ring. 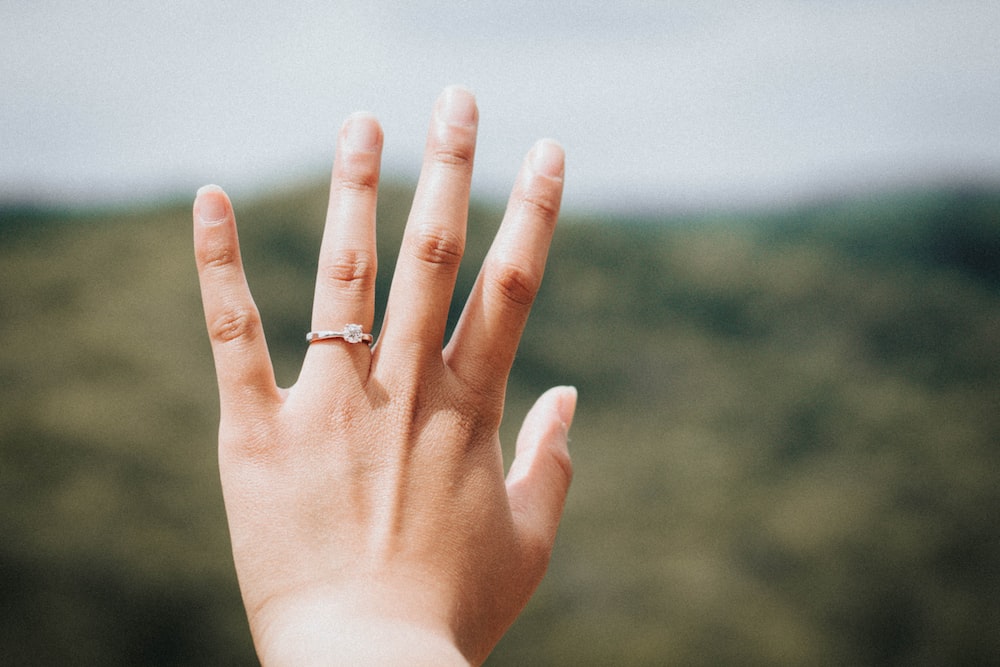 Why I LOVE Beverly Diamonds

There are MANY only diamond and jewelry retailers, but only one that I love and trust for those big purchases. That's Beverly Diamonds. They are ALSO top rated by The Knot and WeddingWire. Check them out!

View Selections Learn More
We earn a commission if you click this link and make a purchase at no additional cost to you.

Clearly, when it comes to four and six-pronged settings, there are a few things to consider. However, if you go to a reputable jeweler, then you shouldn’t go too far wrong with whatever you decide!

It all comes down to what’s a higher priority for you. If security is essential, then go for six because this setting guarantees you more safety and protection. Whereas, if you’d prefer to showcase the beauty of your center stone, then a four-pronged setting is a fabulous choice!

Rosie Greaves is a professional freelance writer and content strategist. She specializes in all things weddings and lifestyle. Having previously written for Cake and Lace and worked as a wedding planner, there’s nothing she enjoys blogging about more!