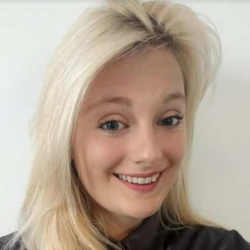 Rosie Greaves
Wedding & Lifestyle Expert at Love You Tomorrow
Rosie Greaves specializes in all things weddings and lifestyle. Having previously written for Cake and Lace and worked as a wedding planner, there’s nothing she enjoys blogging about more!

So you’re looking for that special ring for your beloved, and you’ve decided to shop ethically. You’ve also decided to watch your wallet and budget. But, having done your research, you’re pitching for a ring with a Moissanite or an Amora stone. However, you’re undecided about which to go with. That’s unsurprising, given the amount of information out there and each jewelry site extolling the virtues of both stones. Here’s our guide to what you need to know and need to look out for.

First off, here’s a brief history story for you. Moissanites came about when, in 1893, Dr. Henri Moissand discovered a meteor in the Arizona desert that had fallen to earth some 50,000 years ago. Inside that meteor was masses of sparkling crystals made of silicon carbide, which was eventually named after Dr. Moissand. George Kunz, Tiffany & Co’s gemologist, recognized the crystal’s rarity and potential and named it after the man who discovered it.

Moissand dedicated his life’s work to trying to recreate the crystals in the laboratory but was sadly unsuccessful. He went on to be awarded the Nobel Prize for Chemistry, but it wasn’t until long after his death that there was a breakthrough.

Fast forward to the 1990s. Researchers at the Research Triangle Park in North Carolina were finally able to develop and patent a process for making a pure, albeit a human-made version of silicon carbide (SiC). This is what’s called Moissanite. It’s not just a stone. It’s used to make LED lighting, hard drilling tools, and lots of other really hard-wearing products! Charles & Colvard are the people behind using SiC to make beautiful gems and make the whole engagement ring process way more affordable. Bear in mind that it still isn’t easy to make Moissanite; it takes two to three months to make just one single gem.

That, however, is not the end of this tale. Charles & Colvard dominated the Moissanite market until 2015 when their patent expired. So when you look up the stone, that’s the main reason why their name pops up so frequently. Since the patent expired, new kids on the block have tried to replicate Charles and Colvert’s methods with different success rates, and Amora is one of those.  While we can’t say that the Amora stone is Moissanite, we can say it looks like one, is often compared to one, and where we’re going to compare the two.

Both Moissanite and Amora are popular gemstones that are suitable for every budget and taste. They are often viewed as excellent alternatives to diamonds. Both Moissanite and Amora are also hard, durable, and cost-effective. Now while none of that sounds really romantic, does it? But that’s no reason to discount these guys as options for the budget-conscious romantic.

One thing to bear in mind is that some people, including less reputable jewelers, will tell you they are the same thing. Here we look at what each stone is, and how do they differ from each other.

First off, let’s take a look at the key differences between Moisannite and Amora: 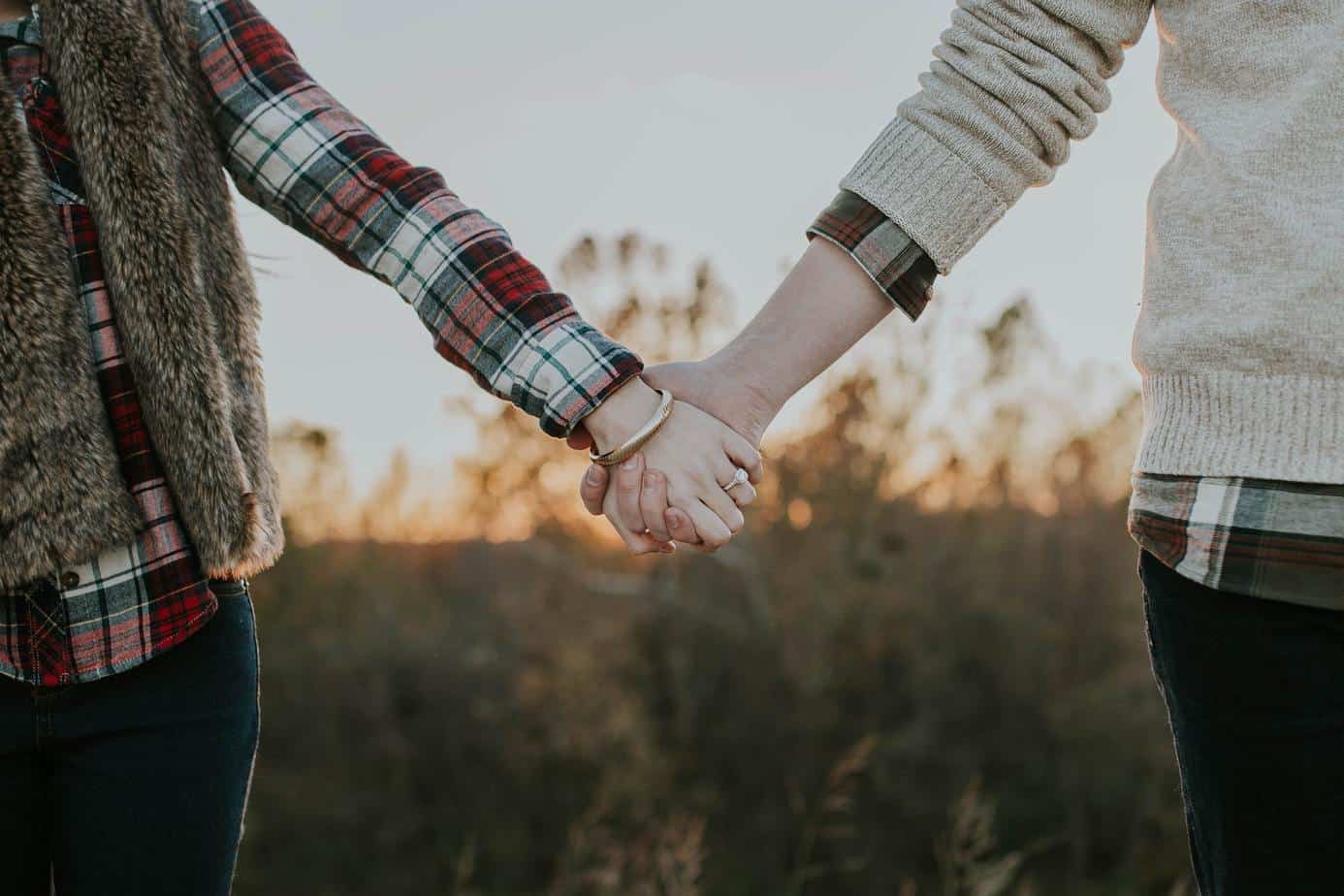 The main differences between the two stones: 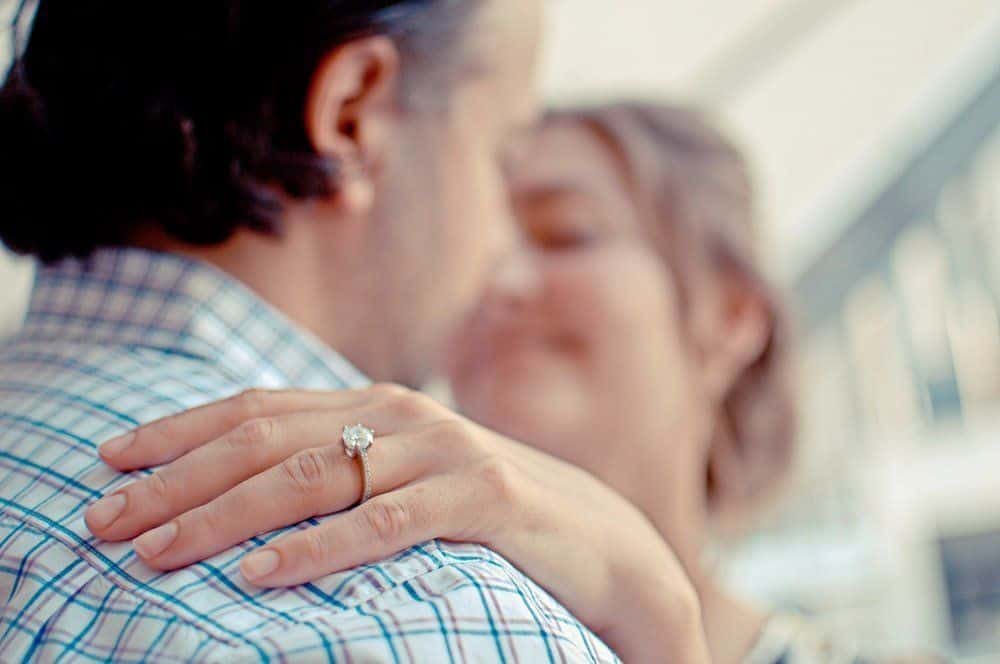 Moissanite is a human-made hard stone. To be clear, the original Moissanite discovered by Moissan is extremely rare, and not what we are talking about here. Moissanite is a hard stone that is human-made. It is so hard that it is almost as hard on the Mohs scale as diamonds. It registers at 9.25 whereas diamonds go in at a 10. Charles and Colvard call it “the world’s most brilliant gem.”

Because it’s so hard, it’s popular with people who want to wear a ring every day. We don’t necessarily want to take it off each time we do the washing up or play sports. It can withstand a lot. It’s long-lasting and harder than rubies, sapphires, and emeralds…and it’s cheaper. It is hard to chip or break, and again, that’s because of its hardness.

What About its Brilliance and Fire?

Moissanite is a very sparkly stone. It’s another reason why it is so often compared to diamonds. It is more brilliant than any other gemstone, according to the Brilliance Refractive Index. Its brilliance ranges from 2.65 to 2.69 on the scale.

The Moissanite’s fire dispersion is more than four times that of any other gemstone on the market. This is greater than any other popular gemstone. When a consumer buys a Moissanite, Charles and Colvard guarantee it for life. It’s their way of promising their customers that the stone will shine forever.

A stone’s fire is assessed by something called dispersion. This is the rainbow or prism effect that happens when pure white light enters a transparent object. When it does this, the light breaks into rainbow colors. These colors are then reflected back to the person looking at the stone. The dispersion of Moissanite is 0.104. This is higher than any other gemstone, and that includes rubies, sapphires, emeralds, and, of course, diamonds.

So, Moissanite is the Only Kid on the Block? 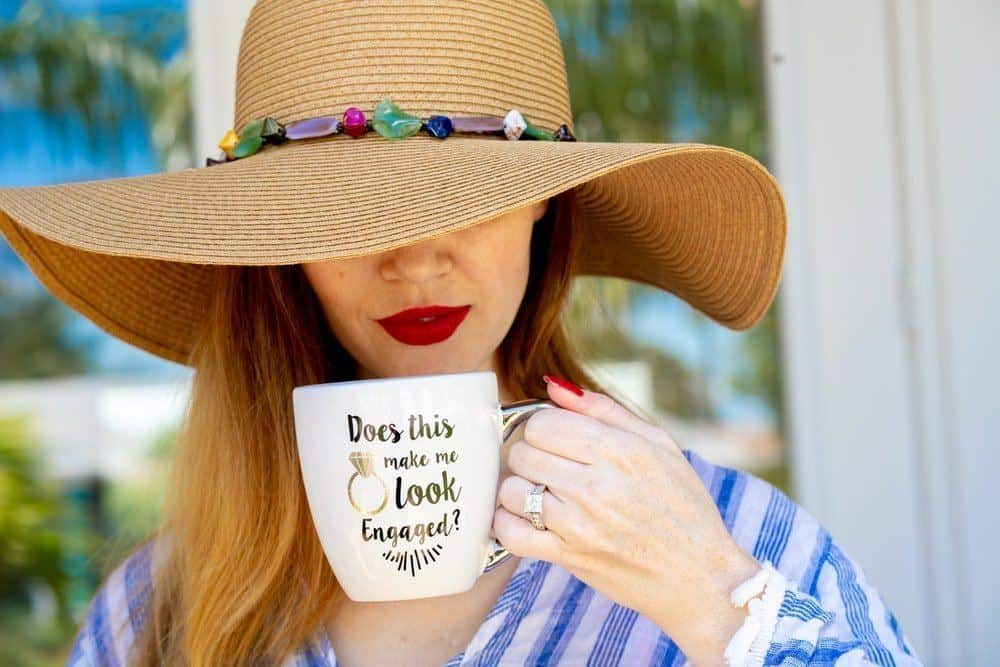 No. In 2015, presumably, to counteract new competitors when their patent ran out, Charles & Colvard created the Forever One™ Moissanite. It is their premium brand stone and extremely popular. It’s the Charles & Colvard trademark for their rock. This stone has a near-diamond hardness and colorless. It is cut with 57-58 facets, and some people argue that it has more fire and brilliance than the diamond.

Is That the Only Moissanite on the Market?

The most significant difference in the stones is their prices and color grade. We know that the Forever One is colorless on the GIA color scale. The Forever Brilliant stone comes in at the near-colorless range of G-H-I, and Forever Classic is J-K. Forever Classic comes with undertones of yellow, green, and gray.  These stones are very similar, and you will struggle to tell the difference if you are not a professional jeweler.

If you’re less fussy about spending more on an entirely colorless stone, these guys make the right choice for you. You’re still getting a Moissanite, just a less expensive one.

What Carat is the Stone?

Unlike diamonds, Moissanite isn’t measured in the same way. Instead, it’s measured by its size. This is because it weighs about 10% less than a diamond. So, you could get a Moissanite and diamonds that are the same size but with differing weights.

However, if you want to know how the Moissanite stone compares to a diamond carat, then the Charles and Colvard website lists both the mass and what carat it would be, were it a diamond.

So, what about the Amora gem? Less is written about this stone, and presumably, this is because it’s been around for less time. It seems to be less popular than the Moissanite for that reason. However, we think it deserves a fair hearing. So let’s take a look! 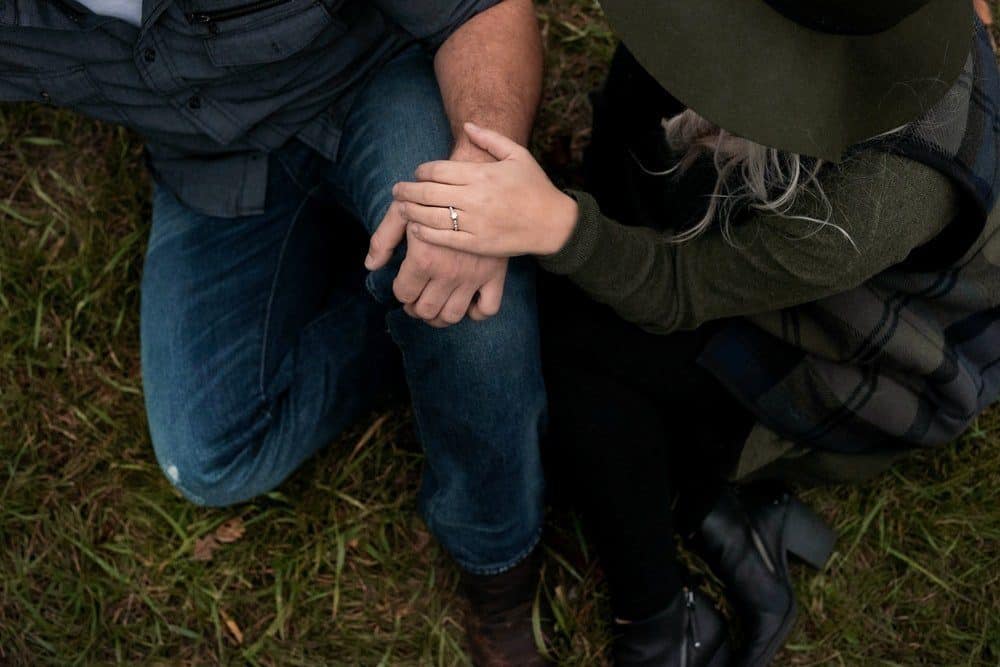 It comes from the silicon carbide family, which, as we know, also includes Moissanite. It is NOT a Moissanite and should not be confused with it. In fact, their website says as much too! It also states that it’s an ethical stone and “only present on Earth in rare quantities near the Earth’s core.” Amora gems come from a company called Better Than Diamonds (BTD).

Does that mean it’s a Natural Stone?

Yes and no. It’s confusing to read that the stone is only present “near the Earth’s core,” given it is lab-grown. It seems unbelievable, or at least improbable that someone could mine near the earth’s core, so let’s just say we don’t quite know where the origin of the gem came from, but that nowadays, they’re lab-grown, just like their competitor!

The science says that the Amora gem is 50% silicon and 50% carbon, the same as Moissanite. But, the structure of the stone is different from Moissanite. Amora has “optically different properties compared to Moissanite. The Amora Gem has a 64 facet girdle, with a heart and arrows round cut. However, Amora doesn’t say precisely what minerals or polytypes are in their stone, so it’s hard to be more specific.

Like the Moissanite, the Amora scores a 9-9.5 on the hardness scale, on the MOHS scale. This makes it a similarly attractive proposition if you’re looking for a hard-wearing stone that can be worn day in, day out. The Amora website has a paragraph about how best to keep the stone clean. It does seem, that despite its near-diamond hardness, it does need more maintenance. Weekly cleans are recommended, and best done by soaking the gem overnight in soapy water.

Like other gemstones, the Amora’s brilliance is measured by the refractive index, or how much light enters it and then splits to create a rainbow effect. Amora gems have a brilliance that is close to that of Moissanite, with a RI of 2.66-2.71. As for its fire, it’s the same as Moissanite, coming in at 0.104, higher than any of the other really popular more traditional gems.

The Amora also has a D-E-F rating on the GIA color scale. The stone is colorless in appearance, but unlike Charles and Colvard, it doesn’t offer a slight color in any of its stones. The Charles and Colvard Forever One Moissanite cut is patented, and so it cannot be copied elsewhere. Amora sells stones in a variety of cuts on its website: Princess, Oval, Round, Cushion, Asscher, Krupps (Emerald), and OEC. Its website has short soundless 3-D videos of each cut for consumers to take a look at before buying.

Does the Amora come with a guarantee? 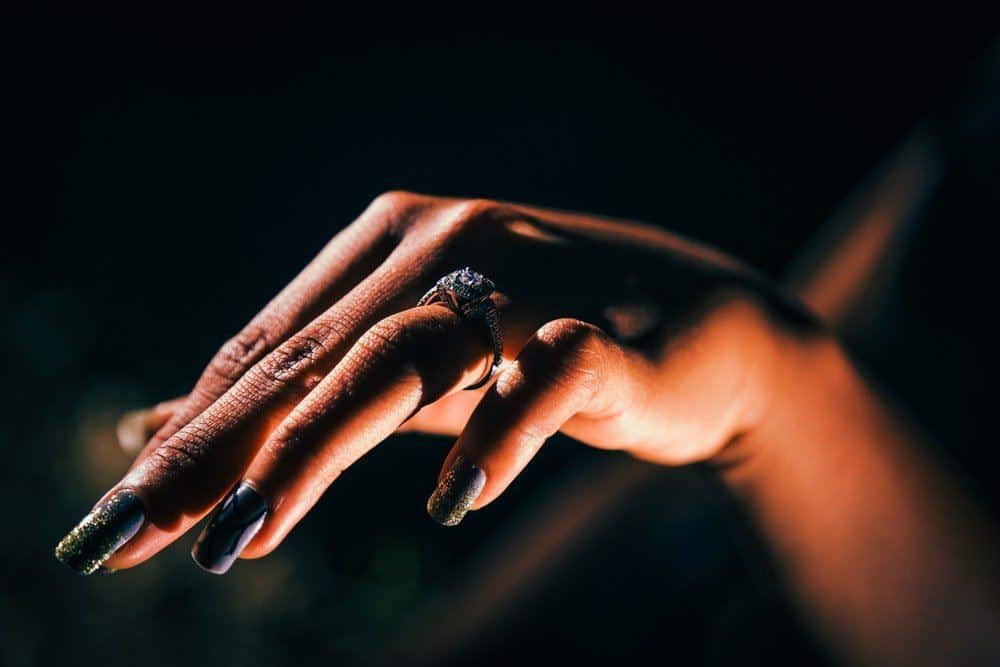 Unlike the Charles and Colvard lifetime guarantee promise, Amora does not offer this. They say it’s because they don’t need to because their stone has a diamond-like hardness, so they’re built to last.

Which Should I Go For?

It’s hard to recommend which of the two gems to go for. One the one hand, if you’re a fan of the tried and tested stone, and one that’s been around for a few decades, then it’s Moissanite, no question. Also, if you’re less persuaded by hyperbolic sales rhetoric and a bigger fan of, not only transparent stones, but transparent information based on facts, the Charles and Colvard site is more informative and precise than its Amora counterpart.

At first glance, this appears to make some somewhat outlandish claims about the stone’s origins given it’s humanmade!

Also, if you feel you’ll have greater peace of mind because you have a stone and a warranty in your hands, then again, Moissanite comes out on top. Interestingly, the Amora site actually doesn’t even try to compare itself to Moissanite. Instead, its marketing pitches the stone straight against diamonds instead.

Both stones are equal in their long-lasting hardness and color. But, the Amora gem seems less clear.

One certain plus point for both stones is that both are ethically sound. There are no difficulties here about sourced diamonds, blood diamonds, or diamonds mined in conflict zones. This is where workers have little or no employment rights, working under terrible conditions. You don’t have to worry about this because both stones are laboratory manufactured, it’s easy to be assured that whichever stone you go for is ethically safe.