Pumped About Peridot – Information And Facts

Are you looking for a gemstone that embodies all the brilliance and luster of an emerald for a mere quarter of a cost? Maybe you, or your significant other, were born in August and you want your engagement or wedding ring to carry your birthstone. Or is green your favorite color and you want to wear a gem that varies in all the majestic shades that green has to offer. Well – Peridot is your solution! Before buying a ring embellished with this brilliant stone, it is important to be well versed in the mineral itself and all the factors of buying a peridot embellished ring, ownership, and upkeep. 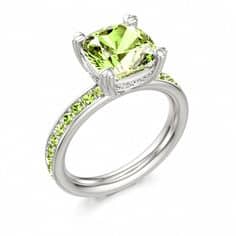 Origin of the Name Peridot

While it’s uncertain where the name originated specifically, there are a few alternative theories. One is that it’s an Arabic word, faridat, which literally means “gem.” The Oxford English Dictionary believes it’s based on a classical Latin word of pedoretes. There are a few variations of spelling from peridod to peritot and pilidod. It’s first recorded use was the translation from Latin to English in 1705 where it was spelled peridot.

Pronounciation of the Word Peridot

A large amount of Peridot’s allure is that it mixes the perk of being a relatively hard and durable stone with having a moderate amount of sparkle and shine. Peridot is a wise choice for the bride and groom who like a little bling, but also work with their hands on a daily basis. Rather than overwhelming you with a list of useless knowledge, we will narrow the important factors down to two simple components of Peridot that we find most useful to the average consumer. 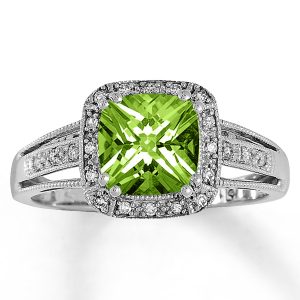 First, Peridot is a moderately resilient mineral. On the hardness scale, Peridot finds itself somewhere between a 6.5 and 7, making it scratch resistant to matters that fall at a lower number than 6.5. To test the authenticity of your Peridot, scratch the surface with an item that is in the 1-6.5 range of the hardness scale – a fingernail, for example, sits at a low 2 – if your nail leaves a scratch on the Peridot, the stone you’re dealing with isn’t authentic.

If you’re well versed in testing specific gravity, the specific gravity of Peridot is 3.34. If none of that made sense to you, don’t worry, it doesn’t to the majority of consumers. A quick Google search will turn up easy to follow steps on testing for specific gravity and, if you’re unconvinced as to the authenticity of your stone, they may make for a useful experiment.

How a Peridot is Formed

Peridot is formed in the mantle of the Earth. It’s brought to the surface during volcanic activity and found in igneous rocks. These kinds of rocks are made from molten rock or magma from volcano lava that has solidified. They’re also the only gem that’s been seen in the pallasite meteorites that periodically crash to Earth. Unfortunately, only a handful of gem quality stones are found in areas where there’s volcanic activity. The places where they are mined regularly have gems large enough to be used for jewelry. In other areas, the grains and crystals are too fine for jewelry production. 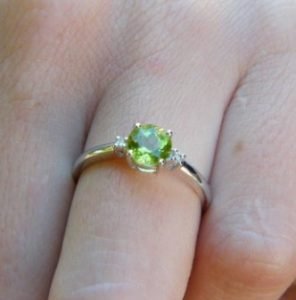 Is a Peridot Rare?

The peridot is made in the same deep layer of the Earth as diamonds. While grains of peridot are plentiful in areas that have volcanic activity, they are not big enough for use as a gemstone in jewelry production. There are only a few large peridots in the world. While not as rare as diamonds, there aren’t many big stones in existence.

Where is Peridot Found?

Areas that are prone to seismic or volcanic activity will see more peridot gemstones than other areas. The island of Zabargad or St. John in the Red Sea was mined for thousands of years before the mine was abandoned. It was rediscovered in the 1900s and was the biggest location for peridot in the world. Some areas will see large stones and others will have only grains of crystals.

Pakistan is the world’s largest supplier of peridot. It’s also found in Myanmar, Vietnam, Australia, Brazil, Kenya, Mexico, Hawaii, and Arizona. In fact, there’s a location at Mount Shadwell in Victoria where people can visit and sift for their own peridot. That can be seen in the video below.

Peridot is the only stone that occurs in only one color, green. This is because many gemstones get their color from the impurities when they were formed, but peridot’s color comes from its composition, not the impurities.The depth and color of that green will vary depending on how much iron was present in the crystal during creation of the gem-grade mineral. The ideal shade for Peridot is widely disputed – while some prefer an olive colored stone, others will argue that a grass colored gem is the best. This wide spread appreciation for the many hues of the stone leave jewelers with little need for color enhancements.

The most common enhancements used on Peridot are ones to fix impurities in the stone itself – that is, resins, waxes and oils to fill in cracks and impurities in the gems surface. Jewellers are required to inform the consumer when their stone was treated in this manner because these treatments require special care.

While an enhanced Peridot ring may require special care, which should be outlined by your jeweler, a Peridot in its natural state won’t require any out of the ordinary care. It is important to remember that, though durable, Peridot can be scratched by matters that hold a hardness level of 6.5 or higher so it is smart to store your beautiful gem encrusted ring in a secured box, pouch, or away from any diamonds or products that may flaw the stone.

With the hardness of peridot only reaching approximately 6.5 on the Mohs scale, the care you take with the ring will influence whether it lasts for years. It’s recommended that you never use a steam or ultrasonic cleaner on your peridot. Always brush sand or dirt gently from the ring before cleaning with mild, soapy water since the sand or dirt can scratch or dull the surface. 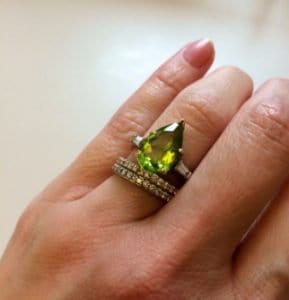 The Price of Peridot

For a high quality gem that is often mistaken for emerald, it might come as a surprise that a carat of Peridot can be purchased for about $40.00 per carat. It is hard to find uncut peridot stones – as a result, a peridot gem that is larger than 4 carats jumps in value to $300/carat.

Other factors that influence the price of a Peridot studded ring are cut, clarity, color and setting. A peridot gem of high quality will have very few inclusions (markings within the depth of the gem), smooth and professional cuts, flashes of white included in the color and a sustainable band.

When choosing a setting for your gem, it is important to keep in mind that the stone itself is the sulfuric compounds used in rhodium plating white gold, and thus, it might be good measure to set your peridot gem in a material other than white gold.

The peridot is normally faceted to really enhance its transparent nature. Table and step cuts are popular, but there are some truly beautiful checkerboard cuts, too. Peridots can be found in many shapes from rounds to ovals to emeralds and octagons.

As its color might suggest, Peridot is believed to promote prosperity in financial, emotional and personal aspects. The stone itself is believed to have a calming effect and is said to be a good refuge to help fight through anger, stress and frustration.

For budding and aspiring psychics, Peridot is said to help strengthen ESP abilities! Far out, right? Well, actually, yeah! In 2006, Peridot was even found in remains of comet dust, making it quite other-worldly.

August Birthstone Poem for the Peridot:

“Wear a peridot or for thee,

The August born without this stone,

It’s said to be associated with traits of love and faithfulness. 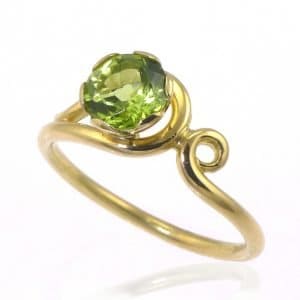 While some versions of the peridot might be close to the color of an emerald, when it’s seen under artificial light, it can really deepen the glow and the color of the peridot. This gives it the brilliant green that’s associated with emeralds and hence the name of evening emerald.

1. Remember that some peridot gems are enhanced through the use of wax or resin – be aware of this when shopping as these treated stones require special care. Retailers and jewellers alike are legally obligated to disclose whether any gem has been treated.

2. Be conscious of the setting of your stone – Peridot is sensitive to the material used in rhodium plating white gold, so if you’re set on a white gold setting, peridot might not be your best gemstone option.

3. When buying a used or antique gem, make sure to get it inspected by a certified gemologist for imperfections that may not be visible to the naked eye. When buying a peridot and diamond ring, be vocal in wanting certifications on the diamonds that you’re buying.

4. For the best bang for your buck on peridot rings, buy from reputable jewelers.

Are you looking for a gemstone that embodies all the brilliance and luster of an emerald for a mere quarter of a cost? Maybe you, or your significant other, were born in August and you want your engagement or wedding ring to carry your birthstone. Or is green your favorite color and you want to wear a gem that varies in all the majestic shades that green has to over. Well – Peridot is your solution! Before buying a ring embellished with this brilliant stone, it is important to be well versed in the mineral itself and all the factors of buying a peridot embellished ring, ownership, and upkeep.