With the variety of devices on the market for hair removal, it can be incredibly confusing to know which one to choose. We’re hoping to make it a bit easier to make up your mind with our Tria Beauty Hair Removal Laser Precision review. This is a system that was released in 2014 and has had some pretty great feedback from people who love the compact system’s ability to get into smaller areas, which isn’t possible with some of the bigger devices. Check for deals on Amazon now

This system was created specifically for the sensitive areas of the face as well as other sensitive areas of the body. After women went nuts for the Tria 4X laser, the company listened to its customers and created a smaller system with the same great features, but they made it compact and ergonomic. This is the perfect device for unwanted facial hair that have plagued women for years. Nobody wants a mustache or chin hair, but it also targets sideburns and areas like that unsightly hair that might grow on the toes and fingers. It’s unfortunate, but some women are just hairy, but it doesn’t have to be an embarrassment with this device in your beauty arsenal. Tria Beauty Precision Hair Removal Laser | Amazon Buy at Amazon
We earn a commission if you click this link and make a purchase at no additional cost to you.

After removing the Tria Precision from the box, turn on the handheld device. You’ll hear a small beep. The unit is locked until the device can be placed against the skin. It’ll unlock once it has read the skin tone with the sensing device built into the unit. This is to avoid burning the skin if the device isn’t meant to work on the shade of your skin.

Pick the level of your treatment. There are three settings for the device, and will be shown by how many lit dots are showing on the unit itself. Overlap areas as you pick up and move the device across your skin. It’ll keep you from missing patches of skin during the process.

There’s a chart that will help with picking the right unit for your skin tone. Make sure to look at the chart before making your purchase. It doesn’t work on dark skin tones because it’s unable to sense a large contrast between the skin tone and the color of the hair. 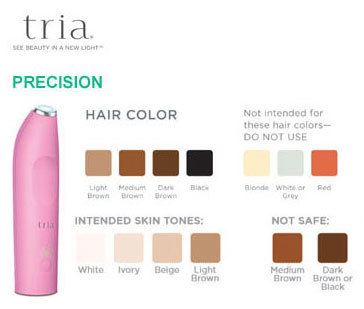 This device was designed specifically for the face and sensitive areas of the body. It has a small treatment area. Other devices for the body will have a wide treatment window, which isn’t safe for the face. The device’s laser and flash of light needs to be as close to the skin as possible, and when it radiates too far, it can create issues. You should always wear safety eyewear when using the device, too.

It only takes a few minutes to treat the areas you’d like to have the hair removed. Every two weeks, the device should be used on the problem areas and in three months of regular use, there should be a noticeable difference in the amount of hair. It can take a few months of regular use past the three months to see permanent reduction in the growth of hair on the face and other sensitive areas. Where It’s Safe to Use the Device

While some people who have had laser treatments understand that it hurts, some who are new to the process don’t know how painful it can actually be. The laser has to penetrate deep under the skin to the hair follicle, which can be quite painful. It’s compared to the pain of a bee sting without the lingering pain and swelling. If you’ve never used a laser for hair removal before, calming gel can work wonders. It’s especially helpful on sensitive areas of the face like the chin or upper lip. Combining ice and calming gel will relieve approximately 90% of the pain, which makes it a great combination.

The device comes in two colors; Dove and Blossom. One is a light gray while the other is a lovely shade of pink. For men who want to use the hair removal device, they might be more comfortable with the dove gray color, but it’s a personal preference. Ease of Handling with the Tria Beauty Precision

One of the biggest pluses to this compact system is the ergonomics of the unit itself. It allows you to get into sensitive areas like the bikini line since it’s slightly curved at the end. Other devices can be incredibly awkward to hold against the skin when you want to do the bikini area.

The Tria Beauty Hair Removal Laser Precision is a great choice for people who want to remove hair on their face, chin, or neck. It has a small treatment window that won’t flash a pulse of light into your eyes. It’s also terrific for sensitive areas where you might want more precision.

Tria Beauty Precision Hair Removal Laser | Amazon Buy at Amazon
We earn a commission if you click this link and make a purchase at no additional cost to you.
Click here to cancel reply.