The modern, or contemporary, era of jewelry consists of the years following 1960 and is marked by revisiting popular jewelry styles of the past. The most popular jewellers, such as Cartier and Tiffany & Co., still display the grandeur and elegance of the past while integrating unique modern designs, exceeding in craftsmanship and fulfilling the demand for quality pieces of jewelry. Because ontemporary jewelry was no longer a status symbol, and more so an artistic platform, jewellers began mixing the media with which it was made, while also creating new popular styles. It is during the Contemporary Era that we begin seeing beautiful and expensive rocks set in inexpensive and dinged up metals that have been intertwined with wires. 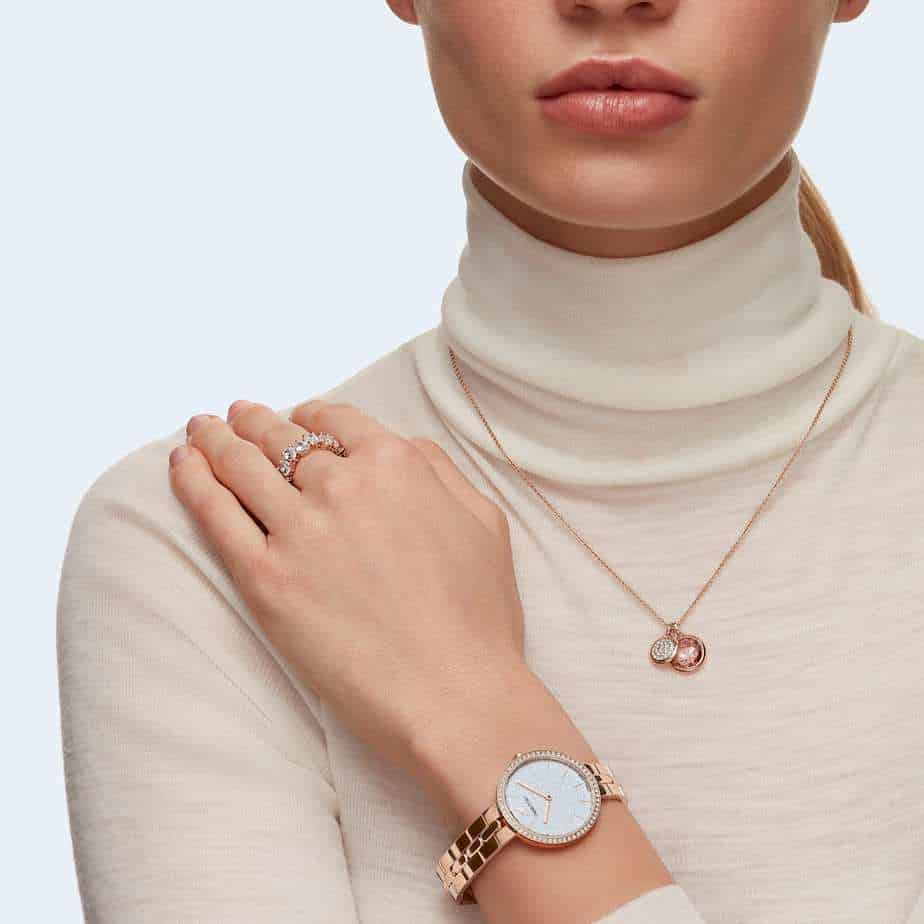 We partnered up with world-renowned brand Swarovski to bring you these EXCLUSIVE BLACK FRIDAY OFFERS: 25% OFF on selected styles AND 50% OFF on select watches! Just in time for the Holiday season.

Start Saving!
We earn a commission if you click this link and make a purchase at no additional cost to you.

It is also during the Contemporary Era that we begin to see men wearing jewelry – gone are the days of jewelry being a female only pleasure, in are the days of men trading in neckties and bowties for gold chains! The 1960’s are also marked by the push for women’s rights which is reflected in the jewelry of the times – the popularity of nature’s elegance is replaced by harsh lines and geometric shapes, smooth and polished metals are traded in for hammered surfaces and ones that melt gold into gold to create a gritty texture.

The jewelry of the 1960’s is extremely unique and perfect for an individual who prides themselves in self-expression.

The 1970’s mark a relaxation in popular styles of jewelry – with the rise in popularity of blue jeans, the jewelry world needed to reflect the casual appearance. What more, with women increasingly entering the work force, the styles of jewelry needed to be such that they can be worn daily at work but were able to be transformed into evening pieces worn on a night out on the town. As a result, layered necklaces and bracelets were very popular during the 1970’s. The jewelry of the 1970’s was also largely inspired by the Hippie and Bohemian styles of the time – bringing the popularity of nature-themed jewelry back. Jewelry was often seen including natural materials such as wood, ivory and stones. Not surprisingly, the favored colors of the 1970’s were earth toned – browns, earthy “mustard” yellows, greens, and dark oranges.

During the 1980’s, the popularity of bold pieces in loud colors rose again! It is during the 1980’s that we see big plastic pieces in loud neon colors. These statement pieces found popularity in plastic because it allowed the wearer to express themselves loudly while not spending the money that would have been associated with having similar pieces made in precious metals. The popular jewelry pieces of this era were oversized hoop earrings, bold and chunky necklaces, the reemergence of brooches, and bold neon bangle bracelets. Jelly bracelets were introduced in this era, as were cocktail rings – rings worn for the sole purpose of shows, rather than ones worn for purpose. Another newly popular style of the Era was introduced by Princess Diana, which was gemstone encrusted headbands, serving both style and functionality.

To get a better idea of jewelry styles of the 1980’s, you don’t need to look any further than the stylings of Madonna and Cyndi Lauper.

The 1990’s are a stark contrast to the 1980’s. The jewelry styles of the 1990’s are prominently marked by the introduction of the grunge era, and insofar, darker and more subdued styles of jewelry and a minimalistic approach to it. The 1990’s were also plagued with unemployment and a downward turn in the economy – this financial decline birthed the idea that in terms of jewelry less is more. The beautiful staples of the past, platinum bands and diamonds for example, were still popular for special occasions, but were no longer seen worn in decadence and the bold neon statement pieces of the recent past were viewed as outdated and tacky. Choker necklaces were extremely common during this era as were pendant necklaces and charm bracelets.

Though interesting, the 2000’s are too recent to be able to pinpoint a specific style unto but from what we have seen thus far, this is the Era of Rebirth and finding beauty in a combination of the pieces of the past.