You’ve looked at all the gemstones on the market and decided you want a diamond – awesome! You took the next step and scoured the face of the earth but have quickly learned that the right diamond for you comes with hurdles that you are unable to jump – it’s too expensive, it’s too small, you don’t know if it’s eco-friendly! You’ve thrown your arms up in despair and are about to surrender – then you stumbled upon this page! Regardless of the reason behind your diamond fueled agony, we’re here to tell you that there’s still hope and that hope is found in man made diamonds. 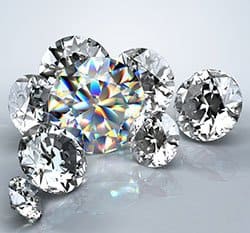 Man made diamonds come in two forms – simulant and synthetic. Before running out to look into either of the two, stop. Though they’re both manmade and sound awfully similar, they are very different, come in different forms, and carry different price-tags – all of which we plan to share with you.

Diamond simulants are imitation diamonds – their looks are similar to those of the highly demanded stone, but their chemical properties are different. Diamond simulants come in three different forms: cubic zirconia, diamond nexus simulant, and moissanite.

Here is a video that shows a real diamond and a simulant side-by-side, and, as you can see, they appear to be very similar to the naked eye. 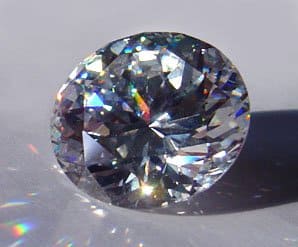 Cubic Zirconia (CZ) is a colorless crystalline form of zirconium. To the untrained eye, newly purchased CZ looks extremely similar to a diamond and can easily be mistaken as such, making it a popular diamond alternative for a mere fraction of the diamond price – we’re talking $40 dollars a carat here! Out of all the man-made diamonds we’ll discuss, CZ is hands down the most affordable of the bunch….but there’s a catch – it’s the least durable.

While a diamond sits at a perfectly rated 10 on the Mohs hardness scale, a CZ sits at an 8 – more durable than many gemstones, but if the durability of diamonds is your buying motive, a CZ may not make a good alternative. What more, CZ has a tendency to absorb oil which dulls and yellows the stone, but at $40.00 a carat, this minor detail can be easily solved (read: replaced).

Here’s a video that makes a case for why someone might want to buy CZ jewelry over a diamond. What would you do to sick while away? Check this website to know more! 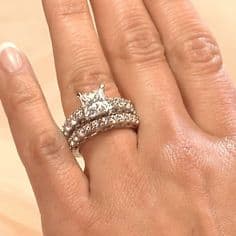 Diamond Nexus Simulants are lab created diamonds that don’t share the chemical makeup of diamonds, though they look virtually the same. A lot of jewelry enthusiasts describe diamond nexus as an elevated form of CZ – taking the makeup of CZ and adding to it to created a stronger and longer-lasting diamond simulant. Due to the additional components added to the Diamond Nexus, it also doesn’t absorb oil so it won’t yellow with routine wear over time. A Diamond Nexus stone rates 9.1 on the Mohs Hardness Scale – significantly more impressive than the CZ, but also reflected in its price tag of approximately $120.00 a carat.

Here’s a video that shows what these lab-created Diamond Nexus Simulants look like.  Not real diamonds, but beautiful nonetheless. 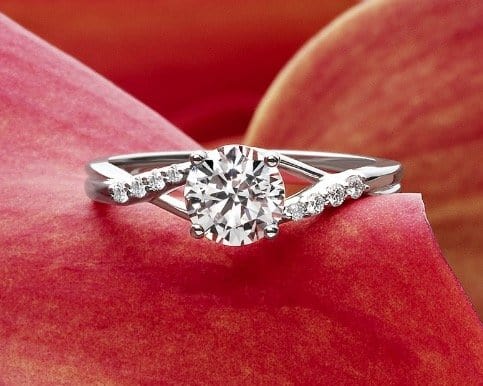 Real Moissanite is an extremely rare and expensive mineral so for the sake of not being redundant, the Moissanite described here is lab created. Moissanite is a beautiful diamond alternative that can sometimes be differentiated from a diamond. Confused? We thought you might be. Moissanite is a diamond simulant in that it possesses the near-colorless, brilliance and beauty of a diamond – but unlike a diamond, it’s flash and fire exceeds that of the stone it is meant to mimic. While the elevated levels of fire in a moissanite stone might be the selling factor for many, others are turned off the ‘disco-ball’ appearance it can give off in proper lighting. Positioned at a 9.25 on the Mohs hardness scale, Moissanite is more durable than CZ and Diamond Nexus – and at, approximately, $250 a carat it is also more expensive than the two.

Here’s a video which compared a natural GIA-certified diamond, an Amora gem, and a Forever One Moissanite diamond.  As the very first video we shared with you mentions, there is a time and a place for real diamonds, but sometimes one might prefer a simulant as they can be just as convincing. 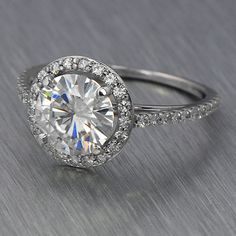 Due to its comparable infancy in the world of Diamond Simulants, there isn’t a whole lot out there on these marvelous lab created stones so we chose to discuss it last! Asha diamonds are a unique take on CZ and even on the elevated version of CZ found in the Diamond Nexus! Like the two, Asha diamonds are, in fact, cubic zirconia, but they’re so much more! Sounds like a Diamond Nexus, right? Wrong! While a diamond nexus is a chemically elevated cubic zirconia, an Asha is a cleverly protected one. Asha uses pure carbon diamond bonds – as it states, the same as those used to create synthetic diamonds – to infused the top layer of the cubic zirconia – giving the Asha diamond the brilliance and fire comparable to a diamond. On the Mohs scale, the Asha diamond rates the highest of the stimulant diamonds at a 9.5, though it is more cost efficient that some of its competitors at $175 a carat.

Though they may not be as durable as the real deal, diamond simulants carry their own positive aspects in pricing, availability, and consistent flawlessness.  Here’s a video to show off the Asha diamond simulant.

There are two methods for making synthetic diamonds: HPHT and CVD.

HPHT is an acronym for high pressure, high temperature, and in itself describes how lab-made diamonds are made using this method. HPHT recreates the natural conditions in which a diamond is cultivated and plants an imperfect and small diamond “seed” to create a bigger and better diamond out of it. HPHT has created some concern in the diamond industry due to the fact that the results of this process are consistently colorless diamonds that rarely fall below the FL grade on the Clarity scale of the 4C’s.

Take a look at this video that will tell you more about High Pressure High Temperature (HPHT) Sintering.

CVD stands for chemical vapor deposition, and although this process is took technical and expensive to be used to make profitable diamonds, it is an important one to note and keep up with because we can only speculate that as technology advances, so will the correlation between this method and synthetic diamonds. The CVD method releases carbon gas into a chamber of high temperature and uses a power source to manipulate the carbon particles to align and create a diamond structure – sounds like something out of The Matrix, doesn’t it? As it stands, this method is typically used for technological purposes, but has been proven to create colorless and flawless diamonds too!

Here is a video that shows more about the CVD diamond creation process.

So there you have it – if you’re in the market for a diamond but want to explore other options, simulate and synthetic diamonds are your next stop!