The Georgian Era is ranges in date from 1714-1837 and spans the period of British Rule under King George I through King George IV. Spanning a period of over a decade, it isn’t plausible to address every trend and historical aspect of this era, but for the purpose of this article, we will address the most popular styles of, and the wedding related, jewelry – we’ll even throw in some Georgian Era wedding fun facts for your reading pleasure! 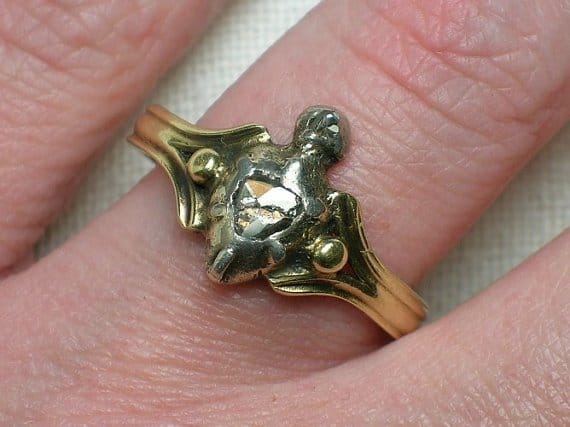 The Jewelry of the Georgian Era was labor intensive hand-made art – unlike today when modern technology generates hundreds of identical pieces, the jewelry you got in the Georgian era was truly one of a kind. While 22 karat and 18 karat gold were two of the most popular metals during the Georgian Era, popularity was also seen in Pinchbeck, a brass that consists of a mix of copper and zinc and is an extremely passable imitation for gold. Check out Etsy's Georgian Era Ring selection for the very best in unique or custom, handmade pieces from our statement rings shops.

During the Georgian Era, many Germans donated their beloved gold to help build and strengthen their military – in turn they received cast iron. This trade off resulted in a patriotic rise in popularity of cast iron jewelry. In terms of stones, diamonds were the most highly coveted stone of the Georgian Era, in part due to the fact that they were relatively unattainable. Despite the high demand for diamonds, gemstones were also extremely popular and used often. 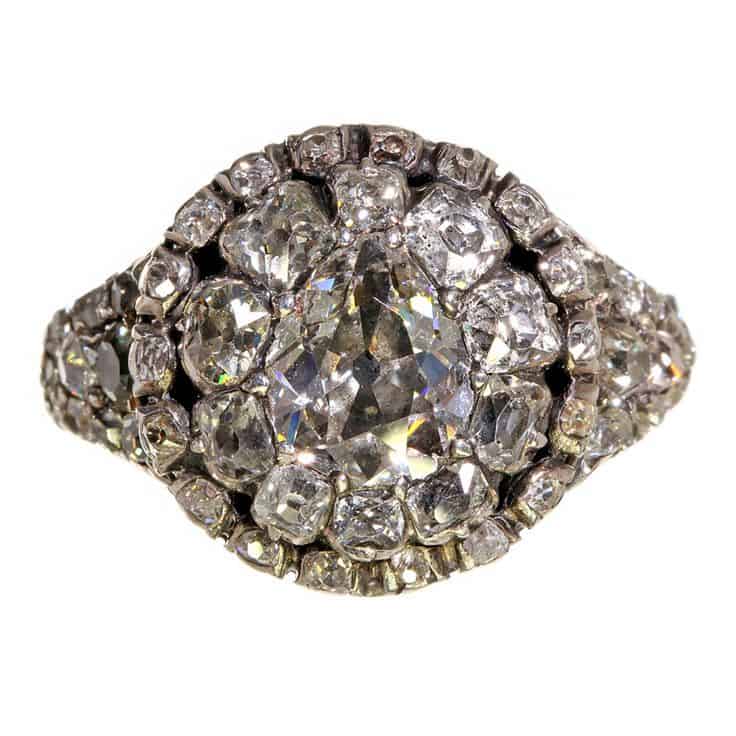 During the Georgian Era, the most popular stone setting was mounting. A mounted setting hides the entirety of the underside of a stone, and as you can imagine, keeps a lot of light from passing through the stone and diminishes its brilliance. At the time, the solution for this unfortunate side-effect of the mount was to place aluminum within the mount, under the stone, in the hope that the light that passes through will reflect of the aluminum and create the brilliance and luster we still desire today. 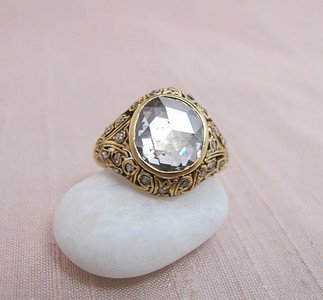 In Jane Austen’s Sense and Sensibility, one of the male characters is seen wearing a ring containing a braided plait of hair. Though today this might sound a little bizarre, during the Georgian era, incorporating  gestures such as these were common, if not completely normal. Hair in rings is probably the strangest trend associated with the Georgian Era, other trends are ones that preserve time and memories, an important aspect of this era. This need to preserve created two items of jewelry, both still popular today – the first is the mourning ring, the second is the locket. 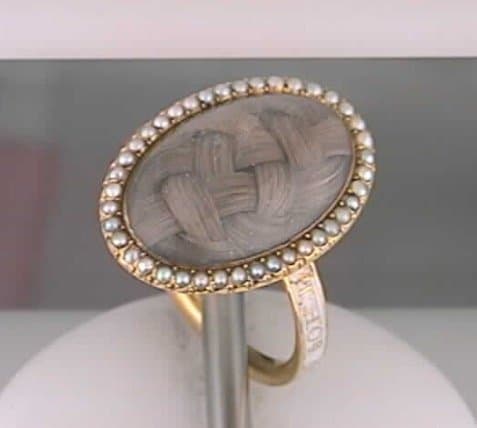 The mourning, or memorial, ring was a way to memorialize those who have passed. This ring traditionally held a small stone and inscription of information as it pertained to the deceased such as their birthday, death date, or name. More elaborate mourning rings contained engraved portraits of the deceased. The locket was also able to preserve time by holding pictures, notes or small items. The locket as we know it comes in the form of a necklace, but in the Georgian times, locket rings were quite popular. 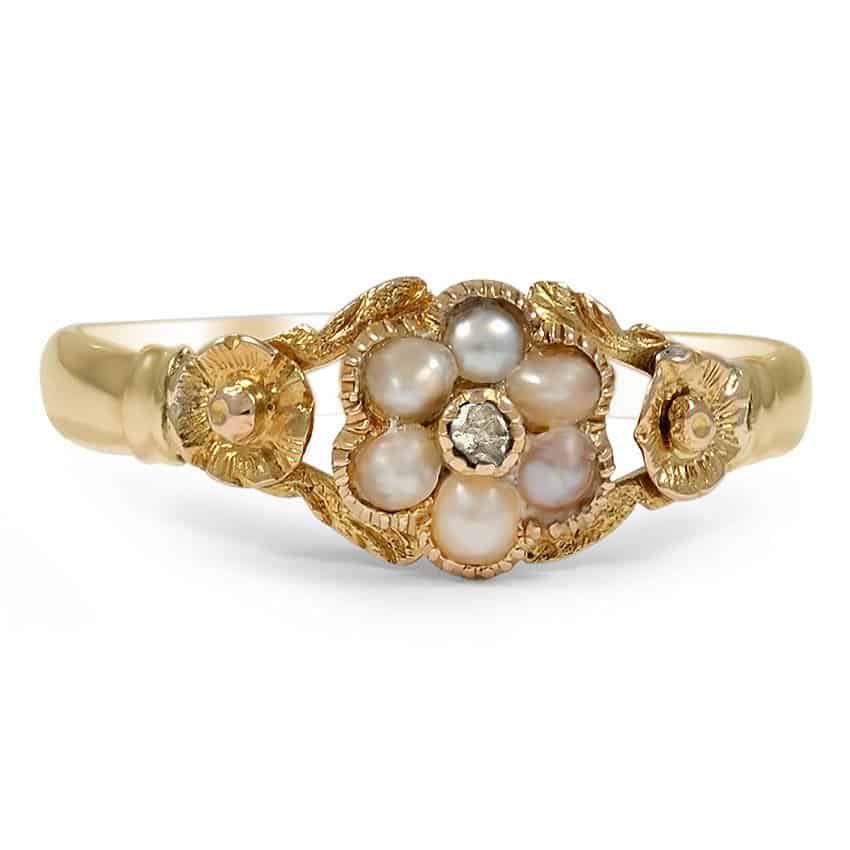 Other than the Posey ring, popular engagement and wedding rings focused heavily on nature. The designs of these rings, whether through inscription or stone placement, oftentimes alluded to butterflies, flowers, doves, and other delicate components of nature.

The general use of engagement rings wasn’t highly popular during the Georgian Era – but if it was afforded by the groom, it was gifted as a symbol of the future grooms love for his future wife. This ring was worn on the fourth finger of the left hand, same as it is today.

While on the discussion of weddings, the Georgian Era saw a rise in wedding related laws. If you are interested in these laws as a whole, they can be found in The Marriage Act of 1753, also known as “An Act for the Better Preventing of Clandestine Marriage”. 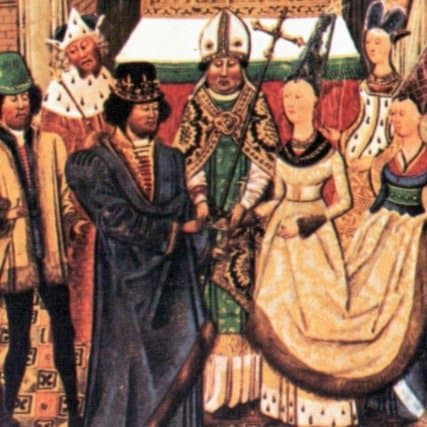 In part, The Marriage Act of 1973 regulated the age of marital consent – stating that an individual has to be 21, or have parental consent, to wed. The Act also regulated when and where a couple can wed – the ceremony would take place before noon in the parish of residence as husband and wife. Finally, The Marriage Act regulated engagement length to consist of a minimum of four weeks – this caused couples to elope, and thus, downsized the popularity of the engagement ring.

Jewelry from the Georgian Era is hard to come by today – this is due to the fact that most jewellers would melt down extra or used pieces to create new ones that followed the trends. As a result of the rarity of jewelry from this time, authentic Georgian Era jewelry is extremely expensive today, selling for $3,000 to $4,000 dollars for something as simple as a gold band.

Check out Etsy's Georgian Era Ring selection for the very best in unique or custom, handmade pieces from our statement rings shops.