As familiar as we may be with a wedding engagement consisting of an elaborate proposal and diamond studded ring, this practice is extremely modern in comparison to the deeply rooted history of engagements as a whole.

Engagement Ring History – Why Learn It? Though the history of the wedding band is much more extensive than that of the engagement ring, we are first introduced to the notion of a second ring during the time of the Roman Empire (200 B.C.). At this time, women were gifted with two separate wedding bands – one gold, one iron. The gold band was to be worn during special occasions and social outings, whereas the iron ring was donned during day-to-day affairs. The first reference to, what we today call an engagement ring, was made in 650 A.D. in a set of laws set forth by the Visigothic king of Hispania, titled The Visigothic Code. The Visigothic Code states that “when the ceremony of betrothal has been performed, …, and the ring shall have been given or accepted as a pledge, although nothing may have been committed to writing, the promise shall, under no circumstances, be broken”.” So, as you see, in as early in history as 650 A.D., the engagement ring became a formal agreement to wed. In 1477 we see the diamonds be introduced to the world of engagement rings. Although it wasn’t rare during these times for nobility to present jewelry to their future spouses, it was in 1477 that the diamond ring became a trend when Archduke Maximillian of Austria proposed to Mary of Burgundy with a ring containing a diamond encrusted “M” on its face! Why the ring finger? The answer to this question dates back to 1686 and an attorney named Henry Swinburne. Henry Swinburne authored a piece titled Treatise of Spousals that deems that the engagement and/or wedding rings shall be worn on the left hands fourth finger, next to the little finger, due to a vein that travels from that finger to the heart – the Vena Amoris, or the Vein of Love. In the 1700’s, the Posie rings began to reign in popularity reverting the trend of diamond engagement rings. Posie rings are gold rings with a short inscription on the inside – these were ideal due to their durability as well as the romance of a personalized message from your future spouse. The 1800’s brought the bling back to the ring with the rise in popularity of the “dearest” ring. This gemstone encrusted ring positioned the stones in a straight line – the names of which spell out the acronym “dearest”. The dearest ring was embellished in the following stones: diamond, emerald, amethyst, ruby, emerald, sapphire, and topaz. Through the 1800 and 1900’s, jewellers have created numerous settings to capitalize on the growing trend of diamond engagement rings – two notable jewelry companies that have developed beautiful and timeless designs are Tiffany’s & Co. and Cartier. 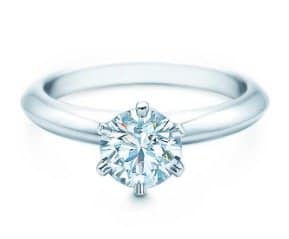 Fifty seven years later, in 1924, Cartier designed the world famous trinity ring. The Trinity Ring encompassed three separate bands, each of which is a symbol for a different aspect of a couples relationship: white gold for friendship, yellow gold for fidelity and loyalty in marriage, and rose gold for love. 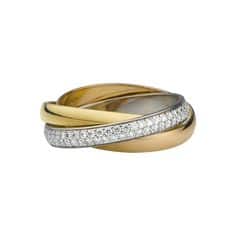 A Diamond Is Forever

1938 is the year that diamonds became the standard for engagement rings when Cartier coined the term “A Diamond is Forever”. This slogan is still commonly used today, and can be interpreted one of two ways. First, a Diamonds durability and value are so strong that the stone retains both over a long duration of time. Second, this slogan symbolizes the strength and durability of a relationship and the love shared between the soon-to-be husband and wife. With such a magnificent play on words, it is not surprising that the slogan is still around today and has been translated to twenty seven languages in the short 78 years. 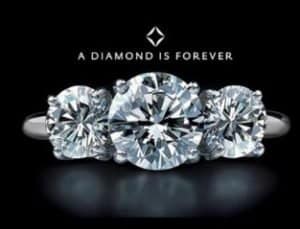 As you can see, the history of engagement rings is rich and filled with ups and downs in trends – this might be a daunting thought, that the style or metal or stone that you currently cherish might be out of style in years to come. But don’t worry – use our directories of gemstones, bands and settings to craft a ring true to you and you will cherish it forever!