Though the fact that wedding bands haven’t always been the shiny diamond studded connotation of love they are today might be common knowledge, the depths of history that they reach might surprise you. 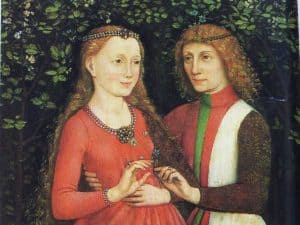 Whether you are personally interested in the history of these symbols of commitment, or if you’re marrying a history buff who you want to floor with some useful and interesting historical fun facts, we have compiled a comprehensive history of the wedding ring and how it has become such a popular piece of our modern culture.

The History of Wedding Bands

The origins of the wedding ring are disputed, but the oldest theory takes us back to prehistory where the word “surprise” highly undervalues the shock factor related to the wedding rings past. It is theorized that in the stone-age, cavemen used to trap and bound their future spouses prior to wedding them – that’s ring, the cavemen kidnapped the women they’d marry and held them hostage until their wedding day! Overtime, the captive woman would begin to feel gratitude and affection for her captor and she would become his wife – though a piece of the material which was used to keep her bound would be worn on her finger – a la, the wedding ring. Real romantic stuff, isn’t it? 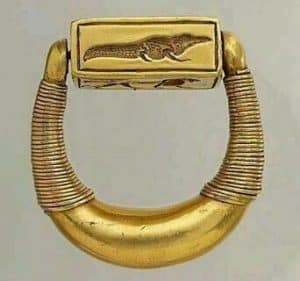 Ancient Egypt is where we first see the Signet Ring – a signature/stamp ring, if you will, which is engraved in a manner which is symbolic of the wearer’s signature. What more, this is where we first see the Fede Ring, out of the two, the more commonly associated with weddings. A Fede ring displays two carved hands holding (or shaking) on its face – this handshake has been claimed to be a symbol for friendship, love and betrothal.

The following years introduce fads that come and pass – but one notable style that has stuck to date, and has even regained popularity in recent years, is the Gimmel Ring which dates back to the mid 1300’s. The Gimmel Ring is a two-part ring, much like a modern day wedding band set. Unlike a set, though, the Gimmel Ring would be worn by both spouses during the time of engagement and would then be welded together and worn by the woman when she became a wife. 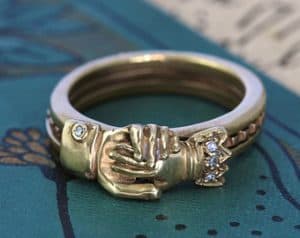 Though diamonds and gems have undoubtedly made their way into jewelry over the course of the aforementioned centuries, we see our first documented diamond wedding ring in 1475 when Constanzo Sforza, Lord of Persaro and Gradara wed Camilla D’Aragona –  at the wedding their love was cemented with a diamond wedding ring and vows which, in part, read “two wills, two hearts, two passions are bonded in marriage by a diamond”. 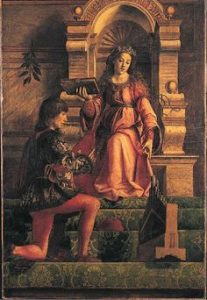 After 1475, diamond wedding rings became increasingly popular, and in the 1600’s we saw another popular trend that can be compared to the modern day wedding band set – the Keepers Ring. With the rise of popularity in diamonds came the expected rise in demand for them, and thus, the rise in cost of them. As with most things that are expensive, people wanted to keep their diamonds nice so the Keeper’s Ring did just that, it kept the diamond nice. 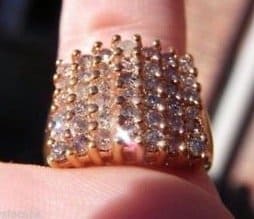 The Keeper’s ring was a chunky gold band that was set around the band that was accented with a diamond – the size and metal used for this ring took any hit that may have harmed the diamond before it could be reached and kept the beautiful stone intact.

Taking a step away from diamonds, the 1700’s bring us back to the early ages of the Fede rings in a new style, that is still extremely popular today, called the Claddagh Ring. The Claddagh Ring, much like its Fede ancestor, is still a symbol of two hands, but rather than shaking, they are each holding a side of a heart that is topped with a crown. The Claddagh Ring is extremely popular still in Irish communities and carries a lot of symbolism in its design – the heart for love, the hands for friendship and the heart for loyalty. 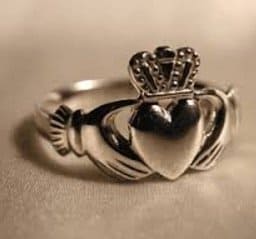 The history of wedding bands continues into the 1800’s as we see a resurrection of the Diamond Industry during the Diamond Rush, which essentially saw the beginning of The Da Beers Groups of Companies, and Da Beers Jeweller who would go on to coin the phrase “A Diamond is Forever” in the mid 1900’s and take the Diamond industry by storm.

While in the years since the formation of The Da Beers diamonds have retained a leading spot in engagement and wedding ring affiliated stones, there is no ‘norm’ to associate with modern wedding rings – access to the internet, the history of wedding rings and the ability to research differing cultural choices in them leaves plenty of room for creativity for future brides and grooms to make personalized and unique choices that fit their preferences and lifestyles.