Kristen Swain
Wedding Lover at Love You Tomorrow
Kristen loves to write about weddings! She’s got a few tips and tricks up her sleeve that not many brides think of, because of how long she’s been involved in the wedding planning community. Having planned her own wedding, she’s speaking from personal experience when she guides you through the do’s and don’ts of your big day.

Are you looking at a new jewelry purchase and want to compare Moissanite vs White Sapphire? Let’s take a look and compare them to help you make that decision.

Both colorless stones offer sparkle and superior hardness while being a fraction of the cost of a diamond. Both are readily available online and in some local stores. Also, both moissanite and White Sapphire are similar in appearance to diamond. But, one clearly stands out if you are looking to replicate the look of a diamond without the cost. The main differences between Moissanite vs White Sapphire are:

What is Moissanite? This lab-created gem was first discovered in 1893 by Nobel Prize-winning French chemist, Henri Moissan. His discovery came about when inspecting a meteorite crater in Arizona when he found microscopic particles of the gem that would ultimately be named after him.

Moissan’s initial thought was that the gems were diamonds, but it was discovered that they were composed of silicon carbide instead. The gems are incredibly rare naturally, and most Moissanite now available is lab-created. 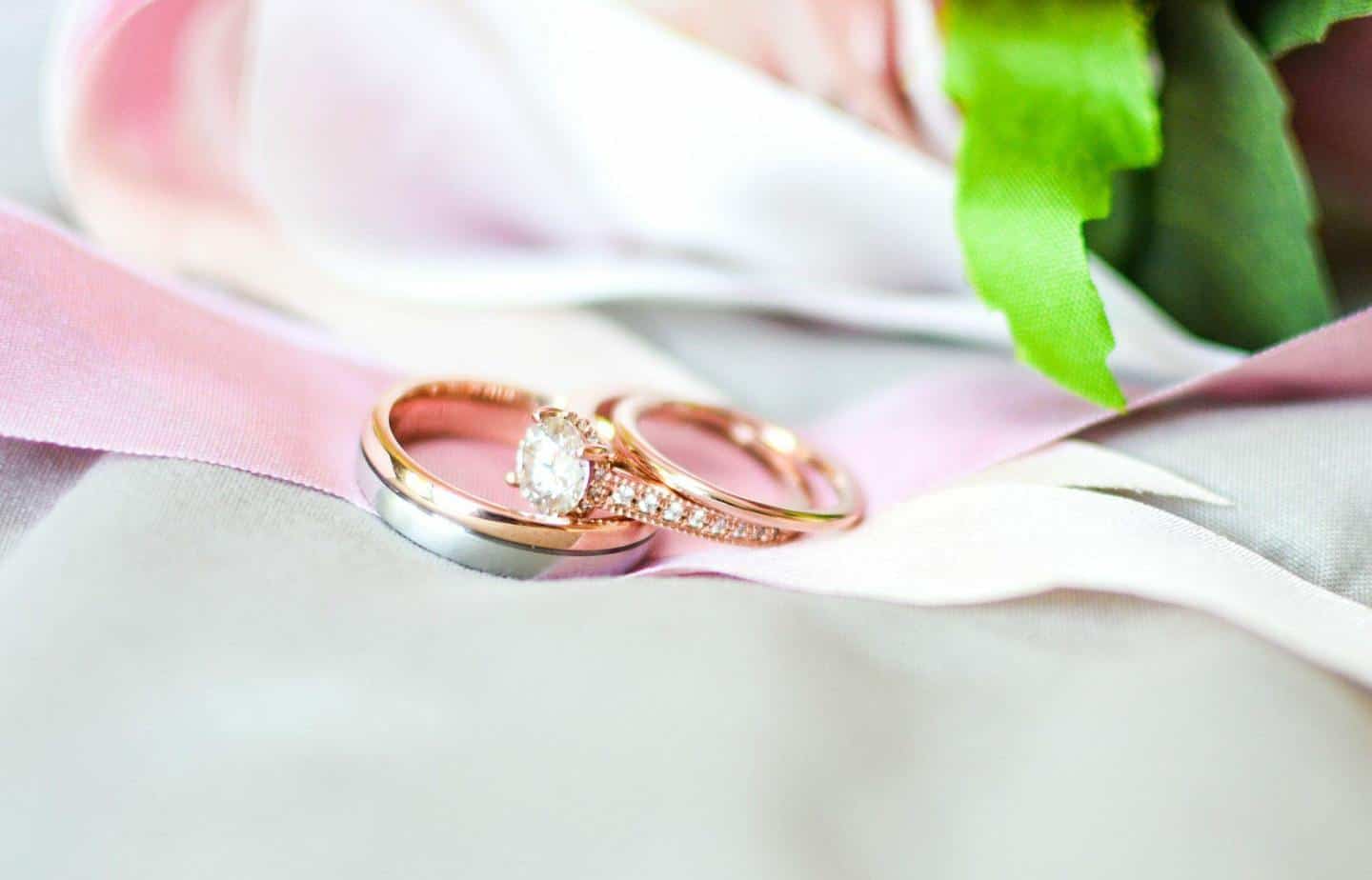 Moissanite is engineered to give a very similar appearance to diamonds although they are somewhat visually different. They do have a similar hardness, but the color and brilliance of the two gems are distinct.  Diamonds are the most well-known gem in comparison to the Moissanite, so it’s easier to compare Moissanite characteristics against diamond characteristics.

White sapphires have become one of the popular alternatives to diamonds in engagement rings, even though the most popular and expensive sapphire is still blue.

White sapphires aren’t as sparkling as diamonds and instead show a more grey-white light and when held next to a diamond may look grey or blue in tone. They are considered more transparent and because of this, lack the sparkle that is intrinsic to a diamond. 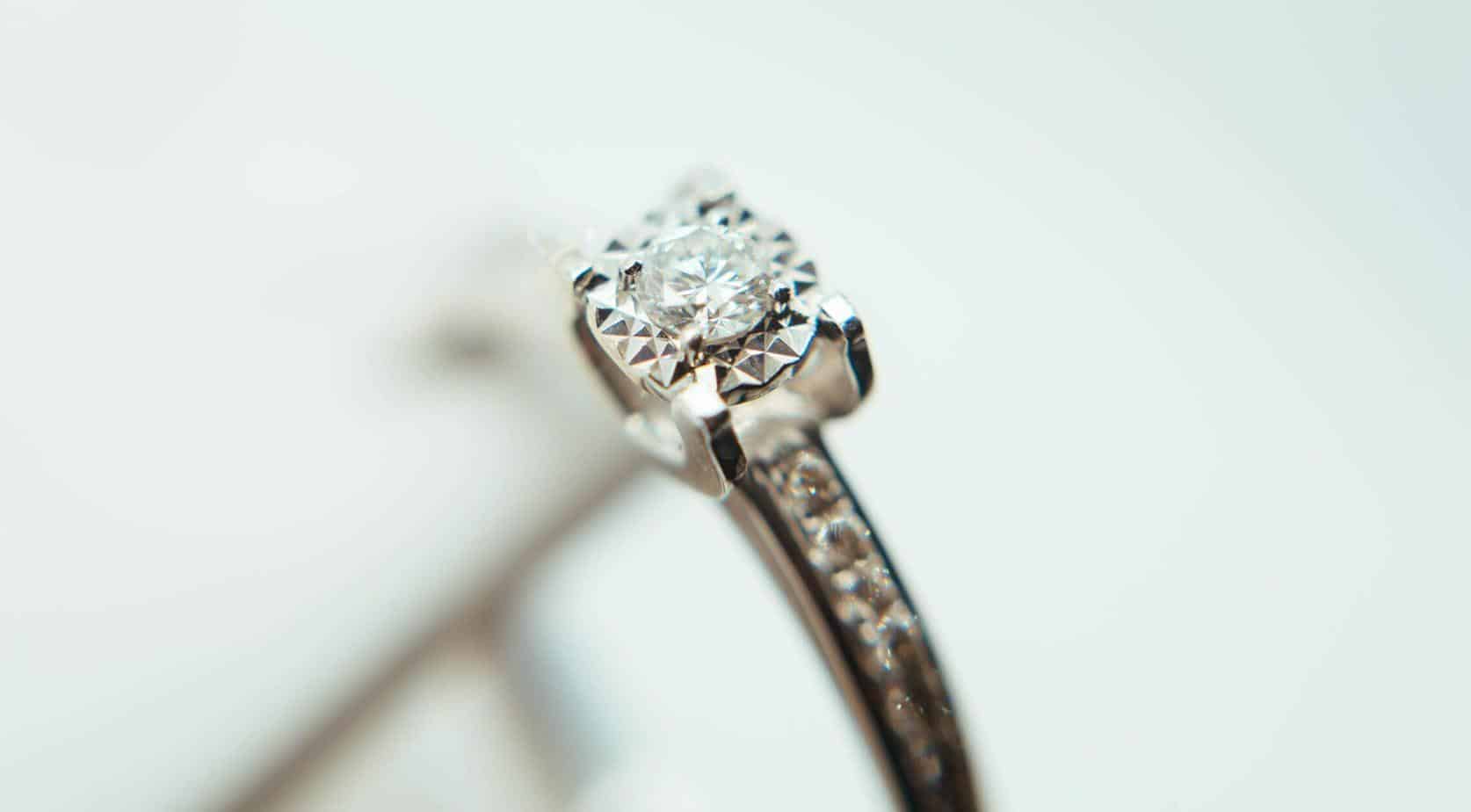 Another alternative is a lab-grown sapphire, grown in an environment similar to that in nature. However, they are comparable to natural sapphires in price.  They are considered more eco-friendly, free from the environmental impact that mining has.

Brilliance in jewelry terms is the amount of light that reflects out of the center of a stone, or how much it sparkles or shines. Brilliance is all about how a stone is cut, instead of the material the stone is made of.

Fire in jewelry terms refers to the color of a gem influencing the sparkle emitted when introduced to light. Fire and Brilliance are often used in conjunction with one another in describing gemstones.

However, between moissanite and White Sapphire, the moissanite will always produce more fire. Sapphires may have color undertones that would reduce the fire of the stone, and just don’t offer the same sparkle that the moissanite would. In reflecting light, the sapphire reflects a white light with no colors of the rainbow.

Moissanite reflects strongly and has been compared to a disco ball in the amount of sparkle it produces. This may make it less desirable than a diamond but more desirable than a White Sapphire.

Moissanites are lab-created and do not have inclusions or inner flaws that a sapphire might have. Sapphires potentially can have inner spots or flecks that flaw the look of the stone, and this will be more noticeable the larger the stone.

White sapphires can frequently be marred with inclusions of hematite, zircon, spinel, calcite, and mica. The larger the stone, the more the inclusion can show. Some inclusions can also be spots or bands of color.

Using the Moh scale for comparison, the hardness factor of both gems is very close., rating at a 9 for White Sapphire and 9.25 for moissanite. 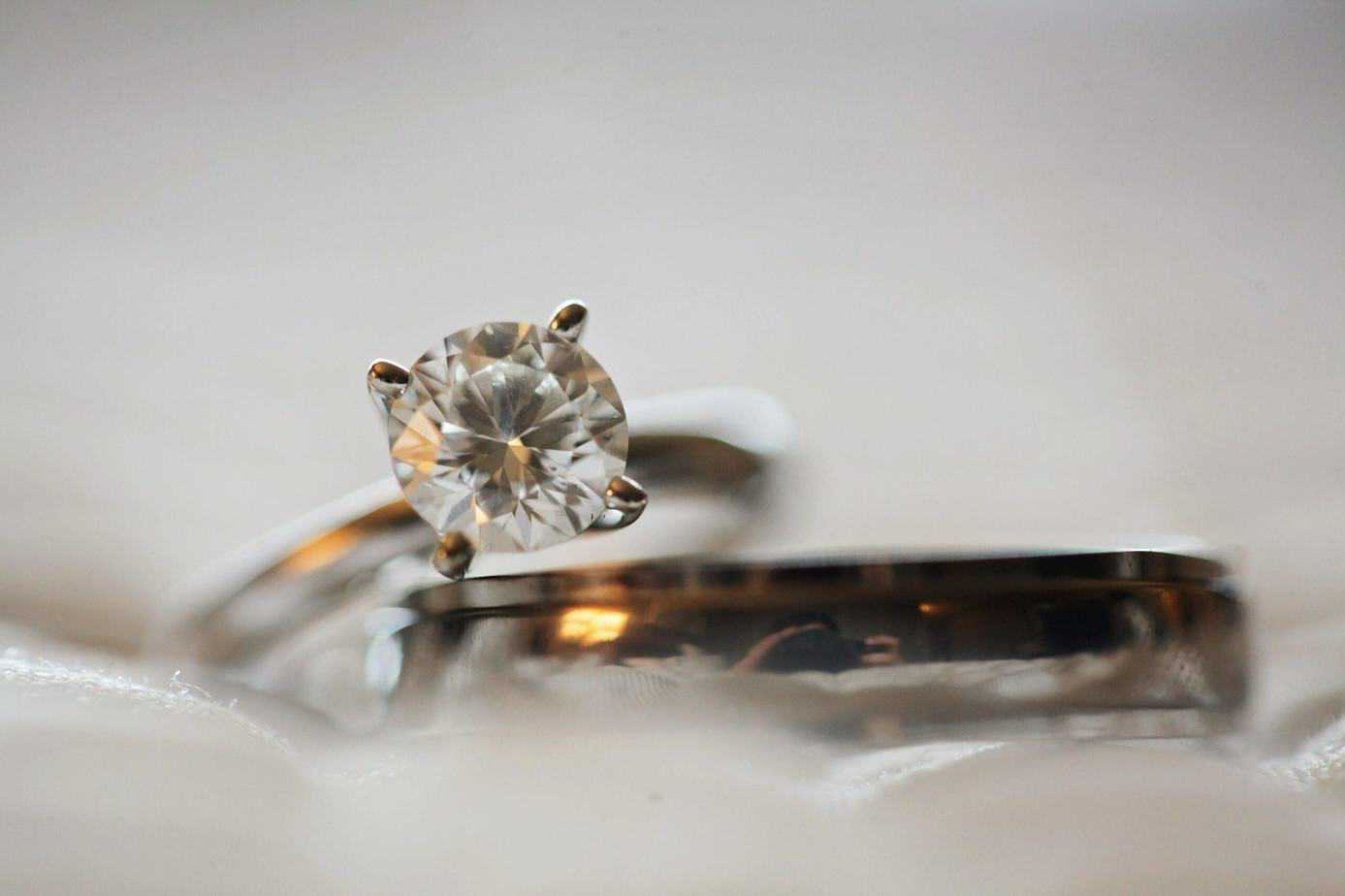 Both moissanite and sapphire jewelry would be best kept from being stored with diamonds as that would be the only potential gemstone that could scratch them.

Both stones are very close to equal in terms of durability, and would both be good stones to have in your everyday jewelry.

One thing to consider is that most sapphires have to be treated or bleached to be nearly colorless. Moissanites are lab-created to be flawless. However, you will need to watch for the overall color of your stone. Moissanite shifts from yellows to brown tones in grading that signifies a lower standard, typically G, H, and I grades.

One final thought to deciding on your new piece of jewelry is to think of the color setting that you will place your stone in. Unless you buy the most expensive stones in colorless grade, or D, E, F grade,  your stone may have a colored undertone.

Keep this in mind as you decide on the color of your setting, where a yellow gold setting could bring out the warm undertones in the Moissanite stone. You may also not want to highlight the undertones in your stone and would choose a setting that is the opposite in tone to hide that quality. 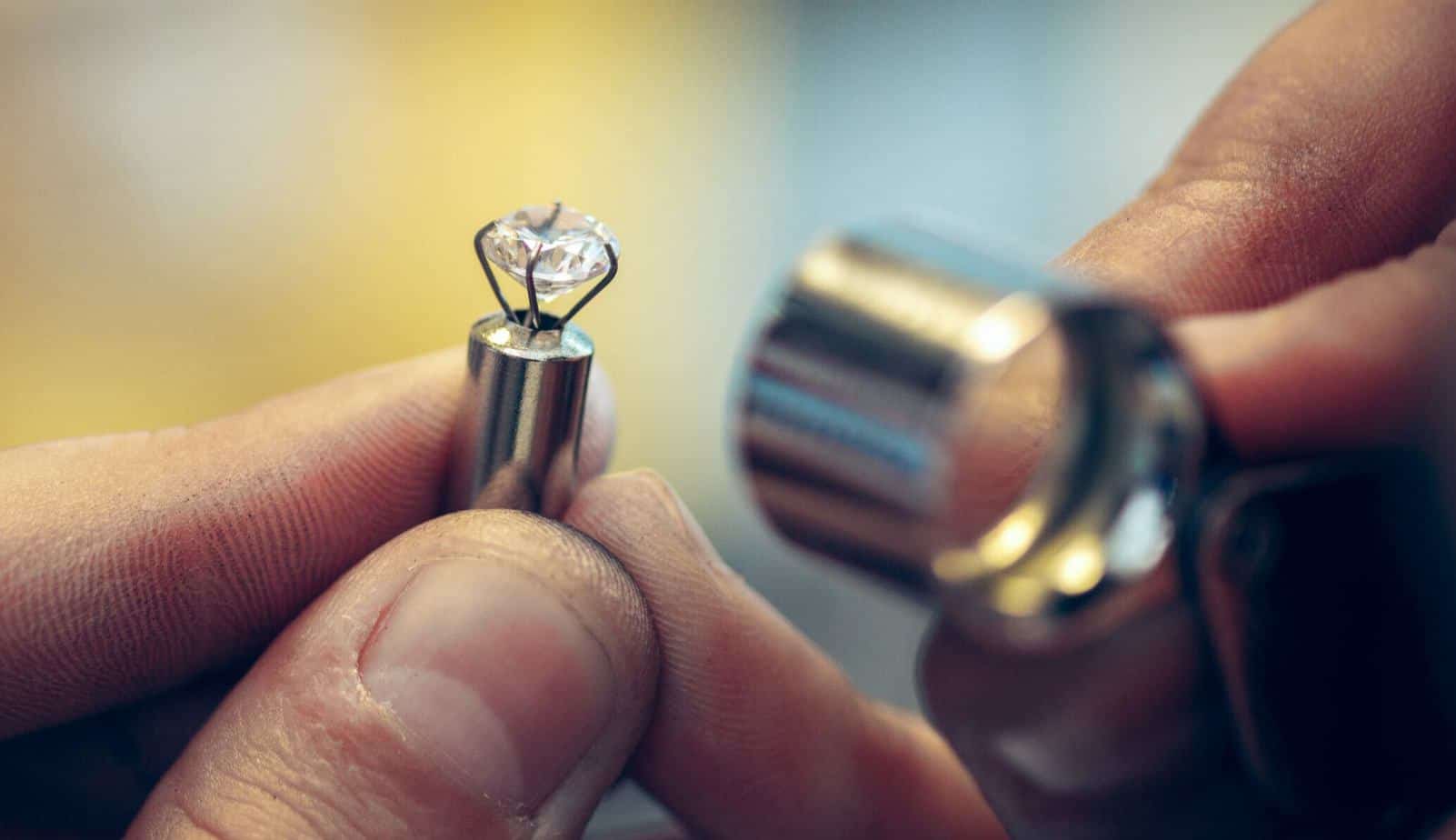 Similarly, the undertones of the White Sapphire would look best with a cool white gold, or for a vintage look could be paired with antique gold. However, because White Sapphires are so transparent, the color of the backing often shows through the stone, so keep this in mind as you are choosing your setting. This intricately detailed cathedral-style ring has customers raving over the fine detailing and gorgeous sparkle. Two colors of gold and the peekaboo stone under the Moissanite solitaire give it unique styling. Although the ring is real gold, the gold stamping does seem to be missing on the inside. This breathtaking halo engagement ring for her features a stunning array of round moissanites, including an exhilarating 1 1/2-carat moissanite at the center. The ring has a total moissanite weight of 2 carats and is styled in Platinum Plated Silver.

This platinum plate silver halo style ring features a 1.5 carat round Moissanite surrounded by small round Moissanite stones. The ring is lightweight enough to wear daily although it does have such a large center stone that matching the wedding band may be difficult. This beautiful bridal set features a woven ribbon pattern that adds beautiful detailing to the ring as well as a secondary band of small round accent Moissanite stones. The full one-carat center stone is in a princess cut. One customer remarked that the size of the stone made the Moissanite perfect as a diamond look-a-like.

Other alternative stones to consider

If you are looking for a choice that is similar in look to a diamond, other white or clear stones might be more suited to your style.

These white or clear gems may be more affordable or the style you are looking for. They could additionally be used as side stone accents to your larger moissanite or sapphire if you would like to create a piece with all-white or clear stones.

Question: Is Moissanite as good as a diamond?

Answer: Diamonds have more fire to them, and sparkle with more white light. But, Moissanite sparkles with more color and is far less expensive. Moissanite ranks higher than diamond on the refractive index at 2.6 to diamond’s 2.4.

Question: Why is White Sapphire so cheap?

Answer: White sapphire is much cheaper than diamonds but requires frequent cleaning to keep them glittering, and their sparkle is much less than moissanite.

Question: Does Moissanite get cloudy?

Answer: Moissanite does not get cloudy over time, unlike some cubic zirconia. Cleaning them occasionally from dirt and oils will help keep their brilliant shine.

Question: When does Moissanite look fake?

Answer: The biggest giveaway with moissanite looking fake is oversizing the gem. A gem that is too large would be a dead giveaway that your ring isn’t a diamond. Similarly, the amount of fire that the stone has and the tint of the stone are also giveaways to a more trained eye.

Question: Can the average person tell the difference between moissanite and diamond?

Answer: No, to the untrained eye, there is little difference between the two stones. High-grade moissanite is comparable to diamonds in being colorless, radiance, and light refraction.

If you are looking for the most similar look in sparkle to a diamond for your stone, then Moissanite should be your choice.  A White Sapphire simply cannot match the Moissanite for its rainbow-colored glitz and its clarity. The blue undertone and lack of glittery shine will simply end up looking like a dull diamond, not to mention White Sapphire needs frequent cleaning to twinkle as much as the moissanite.